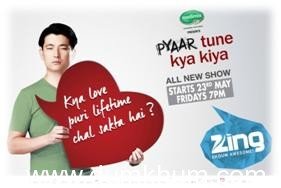 How far would you go to save your love? If your love was at risk, what would you do? What is the line between love and passion?

Stay tuned to Zing this Friday, 23rd May, 2014 as it answers all these queries and many more with the launch of its new television series ‘Pyaar Tune Kya Kiya’. The show telecasts 13 original episodes depicting real, young, burning love, with raw emotion unlike anything ever witnessed in the Indian home before!

Set in the heart of India, the show seeks inspiration from heart throbbing love stories of everyday. Zing’s – Pyaar Tune Kya Kiya delves into the lives of star crossed lovers, played by the biggest celebrities on Indian Television. The weekly series demonstrates real love stories, where passion meets crime with a twist! Each story is bound in a rich mix of lover’s affection and devotion imprinting the minds of viewers with the question “Isne crime to kiya, lekin kuch galat nahi kiya!”

Keeping in line with the unusual show format celebrity hosts, Meiyang Chang and Surbhi Jyoti will take viewers through a journey of the plot, background and characters during each episode. On his association with the show, Chang mentioned “Pyaar Tune Kya Kiya is very close to my heart as I believe in pursuing my dreams just like these lovers. I play the role of a Narrator and direct the audience, aiding them with necessary facts to conclude the outcome of each amorous saga. I also really appreciate that we the hosts, shoot at the plot during each episode making this format of production very innovative, bringing out more connection to each story.”

Surbhi Jyoti went on to add “Shooting Pyaar Tune Kya Kiya was so much of fun! I too am a narrator and my role is to ensure the pieces of each story are seamlessly put together for our viewers to follow. The stories are based on real love stories and are very touching. I always feel for the characters and their emotions on screen. I feel the series is unlike any show currently on television and our fans would love our new avatar!”

Speaking about Zing’s foray into this newly explored genre of fiction, Mr Vishnu Shankar, Programming Head at Zing stated, “Zing as a channel is skewed towards the youth audience. This fact becomes vital when we seek to provide varied content that keeps these youngsters coming back for more. So keeping in line with our philosophy, we are proud to announce Pyaar Tune Kya Kiya. It’s a show that’s different involves passionate, open ended love stories leaving the viewers empathizing with the antagonist rather than succumbing him to his wrong doings. The show is very bold in nature and has an amazing start cast including Sana Khan, Shaleen Malhotra, Pratyusha Banerji, Ayaz Ahmed and many more. The content is captivating even to me and we are extremely delighted to add this original series to our bucket of shows”

Adding to the response Mr Anurag Bedi, EVP & Business Head- Zing stated “We recently revamped the channel and positioned it as fun-loving and for the young. It has always been my personal belief that youth nowadays are bolder and follow their heart where ever it would lead them. Similarly for Pyaar Tune Kya Kiya we drew inspiration from the confidence of this younger generation. We tried to bring alive a novel concept to the regular love-fiction already on air by adding the unique touch of letting the audience decide for themselves the conclusion of each episode. It gives me great pride to launch Pyaar Tune Kya Kiya only on India’s wholly youth oriented channel”

Relive passion like you knew it with the premiere of

Zing is a youth channel first launched in 1997. Predominantly a music channel called Music Asia; it was relaunched as Zee Muzic in 2000 and finally repacked as Zing in 2009. Since then it has catered to youth across India, showcasing film previews, music launches, celebrity gossip, music and much more. The channel has recently widened its reach to Australia, New Zealand, Bangladesh, Fiji, Hong Kong, Indonesia, Philippines, Sri Lanka, Japan, Maldives, Thailand & Middle East.