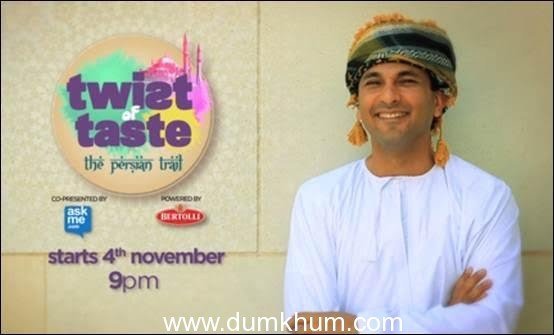 New Delhi, FOX Life, India’s leading travel and lifestyle channel is back with an all new exciting season of the channel’s most watched show, Twist of Taste with Vikas Khanna. Starting 4th November 2015, the new season – The Persian Trail – will see the versatile Michelin starred chef Vikas Khanna take on an adventurous journey across the Middle Eastern. He explores their cuisines, and then give them his signature twist. Watch Vikas Khanna spread his magic every Wednesday and Thursday @ 9:00 pm premiering 4th November 2015 only on FOX Life. During his adventurous expedition, Vikas Khanna travels across Dubai, Abu Dhabi, Oman, Istanbul and Bursa, experiencing the authentic cooking, uncovering what inspired its creation by laying emphasis on the history and culture of the city. Taking inspiration from the dish and its core ingredients, he will return to his kitchen to give the dish his twist. From travelling to the famous fish market in Dubai to  cooking kebabs in the desert Bedouin style; from exploring the Ottoman specialities in Istanbul to dates and pomegranate tasting in Oman’s cultural capital Nizwa, Vikas Khanna takes on the Middle Eastern cuisine and gives his signature touch to the local flavours. Talking about the new season Vikas Khanna said “It feels great to be a part of this exciting show again. In this season of Twist of Taste – The Persian Trail, I have had a chance to explore and experiment with the diverse and delectable Middle Eastern cuisine. It has been a great adventure and an enriching journey to discover these culturally rich cities and its unique flavours. It’s always a wonderful feeling to meet new people and share our recipes and culture!” Swati Mohan, Business Head – India, FOX International Channels said, “Twist of Taste has been a flagship show for FOX Life and its popularity with the viewers is what has had us bring it back now for the 5th season. This season promises to be more special than ever, as it brings with it a whole new kind of twist where Vikas is seen exploring International cuisine, adding to it a sprinkle of India in his own special way. Shot across the Middle East, his journeys and experiences with varied cultures and local people makes for content that viewers will not want to miss.”

From Dubai’s enchanting musical evenings to Abu Dhabi’s Arabian delicacies; from Oman’s gracious hospitality to Istanbul’s rich culture, this season promises a great deal of excitement and thrill. Watch Vikas Khanna spread his magic from UAE to Turkey on ‘Twist of Taste – The Persian Trail” starting 4th November 2015 every Wednesday and Thursday at 9pm only on FOX Life.

FOX Life is a global brand, the mother of all lifestyle channels in the FOX International Channels portfolio. FOX Life in India showcases un-scripted travel & lifestyle content covering interesting journeys. Be it mouth-watering food from around the world, to the latest fashion, to music, to party, to reality, to sexy destinations. This channel gives its viewers a unique perspective on life and makes them savvier about things they’re interested in. FOX Life also fuels the audience’s desire to better the quality of his life and have a large worldly perceptive on what’s going around here, there are everywhere!

FOX Life is available on HD across several networks in the country and the channel itself reaches out to audiences in India and various South Asian countries including Nepal, Bhutan, Bangladesh, Pakistan and Sri Lanka. The channel is available in four different languages- English, Hindi, Tamil and Bengali.