The Man Without Fear, Ashish Chaudhary Wins The Coveted Title Of 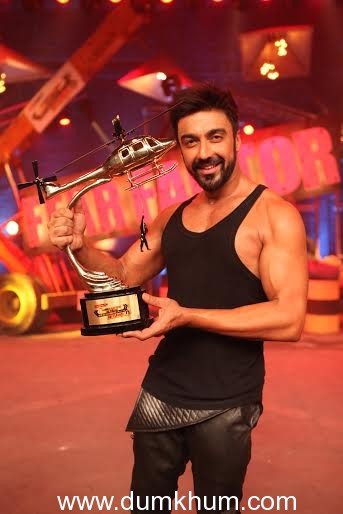 The greater the obstacle, the greater the victory’, was the mantra for the Khiladis this season of Khatron Ke Khiladi – Darr Ka Blockbuster Returns. Facing every fear and hurdle with more zest and enthusiasm, they embarked on the journey to conquer their phobias from the very first day on the show. But in the end there could be only one winner, one ultimate Khiladi that emerges as victor of the season and surpassing the intense competition from the rest and, Ashish Chaudhary proved to be the best among the rest!

The journey this season has by far been the most adventurous and demanding, with stunt maestro Rohit Shetty upping the ante of the stunts and the Khiladis putting in maximum effort to prove their mettle at every step of this eventful expedition. Just as spoils of the war go to the victor, Ashish Chaudhary won the hefty prize amount of Rs.25 Lakh along with the ‘New Generation Mahindra Scorpio’ car by marginally beating Chang in the final stunt of the show. Exhibiting the uninhibited mettle of the ultimate Khiladi, Ashish Chaudhary pushed beyond his own personal limits, defeating not only competition but also the task-related obstacles which can strike fear into the hearts of many. From tackling crocodiles to taming lions, jumping off choppers to free falling atop buildings, from deep diving into the ocean to walking through flaming infernos –Ashish Chaudhary did them all and in the true spirit of sportsmanship and daring.  Ever since he embarked on this adventurous journey he never looked back once, despite competition getting fiercer and daunting as the show progressed.

Commenting on his invigorating journey and winning the coveted prize, Ashish Chaudhary says, “After some rash decisions earlier in my career, I’ve reached a stage where I feel that work you ‘enjoy’ is work you do best. Before you chase a goal or a win, I feel you must see to it that you thoroughly enjoy the road that leads to it. To be happy, to be light hearted & to make great friends is the way I choose to live, and those are the precise reasons why I chose to do KKK. And just like all my endeavours in life, I chose to do it to the best of my ability. What came after that, the win, is just a perk. Even if I didn’t win, this has been the best decision of my life. Losses and wins come n go, what stays are happy memories and happy relationships. Being courageous, being kind and being happy can guide everyone, through anything.”

Considered as India’s most daring and adventurous show, targeted at reality show lovers and adrenaline junkies, Khatron Ke Khiladi – Darr Ka Blockbuster Returns transformed Cape Town into the centre of unmatched action adventure. Amongst the thrilling introductions this season, Rohit Shetty threw in a few hair-raising surprises of his own, with the Khiladis staying alert 24×7 when inside the ‘Darr Ka Ghar’. If competition from the co-Khiladis and the wildcard contestants wasn’t enough, the Khiladis had to overcome the competition from a challenger for the first time ever on the show. With Rohit Shetty devising and fabricating stunts that were even more gruelling and arduous, to overcome the benchmark set by the previous season, the competition between the Khiladis was taken up another notch. The blend of riveting action stunts, spirited Khiladis and stunt maestro Rohit Shetty proved to be the perfect formula for success as this season of Khatron Ke Khiladi broke all the previous records in terms of ratings and entertainment.

Applauding the successful run of Khatron Ke Khiladi: Darr Ka Blockbuster Returns, Manisha Sharma, Programming Head – COLORS, adds “COLORS is known to go beyond conventional entertainment, and provide content that is not only engaging but innovative as well.  Our programming sets benchmarks for the industry. Khatron Ke Khiladi has been one of our flagship properties which has always been the viewer’s favourite, keeping them glued to every episode.  With Rohit Shetty as stunt architect and presenter, the show has managed to beat its own previous records in content, making it far more entertaining than ever before. The ever growing popularity of the show on every front – be it business or viewership – is proof of the success that it has achieved.  We have managed to complete another successful season with scaling numbers. Season on season Khatron Ke Khiladi has been exceeding the expectations without wavering.”