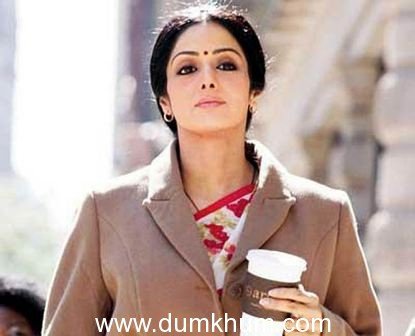 Sometimes real life experiences teach you a lesson or two, but in the case of the writer Director of English Vinglish Gauri Shinde, it has turned out to be a huge blessing in disguise. Just imagine her mother experiencing the same situation in her time and how she overcomes her shortcomings, becomes the focal point for Gauri to convert it into a film and in the process changing lives of so many of such women who are victims of the societal norms and false and blind aping of the western culture and lifestyle dominated by its language. Gauri who has done her course in film making from New York and having directed several Ad films, English Vinglish is a Cinematic wonder as a debutante. Having minutely researched, with every details beautifully incorporated and wonderful casting to complete her package has managed to deliver a near blockbuster of a film.

Now could this have been possible without the one and only actor, Sridevi, who after a hiatus of nearly 15 years has proved yet again that an actor is an actor, is an actor and will not die come what may!

What a performance, every emotion in the bag very well portrayed and that too without going overboard. Playing the role of a Pune Based middle class Maharashtrian housewife Shashi Godbole – Yes! Leading a mundane routine life and making ladoos and even selling them small time, small scale is happy, but her family comprising of a husband (Adil Hussein), too busy to lead a family life and be with her. Than there are two children. One a school going and grown up sarcastic and taunting daughter Sapna, who keeps on belittling her about her not being able to understand and talk in English, as compared to her little son Sagar (Shivansh Kotia) , who is just adorable and loves her the most. He coaxes her into doing that Michael Jackson’s signature jig, which she keeps on doing to express her pleasure and happiness and she does that thrice in the film. It’s indeed a treat to watch her. What a return to the big cellular magic world of cinema. She lives the character as if she is the IT GIRL!

As for the story to add to her dilemma there is a call from her sister in USA and she has to go to New York to attend her niece’s wedding. Now being the only sister she needs to go in advance to help her. But realizing her problem with English language, she gets panicky at the very idea of going alone. But coaxed and cajoled she ultimately takes the plunge!

From managing her language barrier all throughout her journey to USA, which gets a booster in the form of a co-passenger who happens to be Amitabh Bachchan in a small but hilarious cameo appearance, making her feel all the more confident. Once in US again the same problem of not knowing English makes her feel even more lonely and miserable. Her coffee shop encounter virtually changes the course of her life. Her getting panicky is just very typical of anyone who is trying to come to terms with the reality in a foreign land, and as she is already a victim of rebuke, sarcasm and neglect back home, is very difficult for her to maintain a manageable confidence level. Making her stay in USA meaningful, she enrolls into an English tuition class, without anyone’s knowledge, except for her niece (Priya Anand) already a known face in Tamil and Telegu Cinema has done a very good job of the limited role she is assigned to deliver.

From here onwards it is a series of, touchy and real funny moments and encounters of hilarious kind. Especially all her batch mates at the tuition class are a bunch of ethnic lot from different continent and all have performed as per the asking and turn out a lovely and touching performance. Especially Cory Hibbs as David Fischer an English Teacher, who is gay but never, gives in to those stupid mannerisms and is a real scene stealer. French chef Laurent (Mehdi Nebbou), particularly develops a soft corner for the Indian Diva and performs low key but with equal ease.

Camera work by Laxman Utekar is top class. First time foreign locations are exploited per say. Manhattan is Manhattan every bit, with no compromise and the spirit of New York is captured ditto!!

Music by Amit Trivedi adds to the mood of the film with various tracks and the one in the end to celebrate the marriage “Navrai Majhe takes the cake and complements the spirit of the main theme of the film. And what can you say for Resool Pookutty, but thumbs up!

The film is not only just about all this, but in the bargain one of most important issue which is tackled. In most of the family practically, the way children’s are brought up shows the influence of western culture and the importance of English language, overruling all the other family values and the principles. The two important lessons taught are that parents are equally responsible in bringing up and encouraging their children who are fed on the fast culture of the western world and the importance given to English at the cost of their mother tongue and the spoken National language.

A MUST WATCH FOR EVERYONE!!!