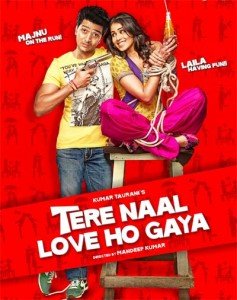 Mini (Genelia D’Souza) is a young girl who lives off her father Bhatti’s (Tinnu Anand) money and wealth. She hates the term “marriage”, however is still being forced to get married by her father. Viren (Riteish Deshmukh) is a hard-working simpleton who dreams of having his own travel agency with a fleet of cars for which he is painstakingly saving money. He currently works as a rickshaw-driver for Bhatti. Bhatti sells off all his rickshaws one day with Viren’s savings of Rs.60,000 in it and Viren drinks alcohol to the fullest to drown his sorrows. In a drunken stupor Viren lands up at Bhatti’s doorstep demanding his money back, while Mini’s engagement is in progress. An argument ensues and Viren lays his hands on a pistol. In the commotion, Mini seizes the opportunity of cancelling her marriage and forces Viren to kidnap her and makes him drive them off in the waiting vehicle. The spunky Mini makes a deal with Viren that he will follow her instructions and will demand a ransom of Rs 10 lakh (1 million rupees) from her father. He can then have his Rs 60,000 and she will keep the rest as she does not want to go back home and get married. While the ransom letter goes to Mini’s father, the couple enter into someone’s home and try to make ends meet. In the process, they fall in love and are happy being with each other. The story takes a twist when Mini’s fiancé Sunny along with her father comes to pay the ransom amount but actually fools them and starts firing, hoping to take Mini back. Suddenly, Mini and Viren are kidnapped by another person and taken away to the Chowdhary’s haveli.

Chowdhary (Om Puri) is a notorious kidnapping kingpin, who makes a living out of demanding ransom. Just when you think Chowdhary is a villain of sorts and some never-ending torture drama will unfold, we discover that Viren alias “Chotu” is Chowdhary’s son. Disapproving of his father’s ways, Viren has left home six years ago to work in Patiala as a rickshaw driver. The story unfolds and leads to a dramatic climax involving a shiny horse and a beautiful car! Mini’s father comes to take her, Mini is very sad to go back home and Viren also tells her to go. Mini’s marriage day comes, Viren has a conversation with his father and after that he and Mini are married. Mini finally realizes that she is married to Viren and they both live happily.

Tune to Sony Entertainment Television on Sunday at  9:00pm