One of the India’s most prolific and awarded filmmakers Shyam Benegal is back on Television, 25 years after his landmark TV Series ‘Bharat Ek Khoj’. Samvidhaan – The Making of the Constitution of India is a 10 part mini-series produced by Rajya Sabha Television and directed by Shyam Benegal. The series goes on air beginning March 2 at 10AM with a repeat telecast at 10PM every Sunday on RajyaSabha TV. 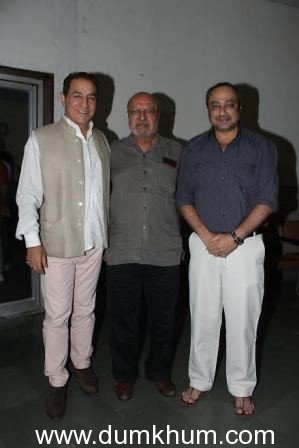 Shyam Benegal says, “The making of India’s Constitution is an incredible story of almost impossible dimensions. It is a story of perennial relevance. I am fortunate to have got the chance to narrate this story for television.”

“The story that is India and the story ‘of’ India and its birth has rarely been told. And the story of the birth of this rich and diverse country begins with the framing of our Constitution. At Rajya Sabha Television our endeavour is to create programs that document contemporary history of Independent India. ‘Samvidhaan’ (the making of the Constitution of India) was a natural progress in this journey,” says Gurdeep Singh Sappal, CEO Rajya Sabha Television, who has produced the series.

After more than a year and a half of extensive research during which the writing also commenced, Samvidhaan went on the floor in August 2013. Over a 1000 people have been directly involved in the making of this serial and has 150 experienced film and television actors.