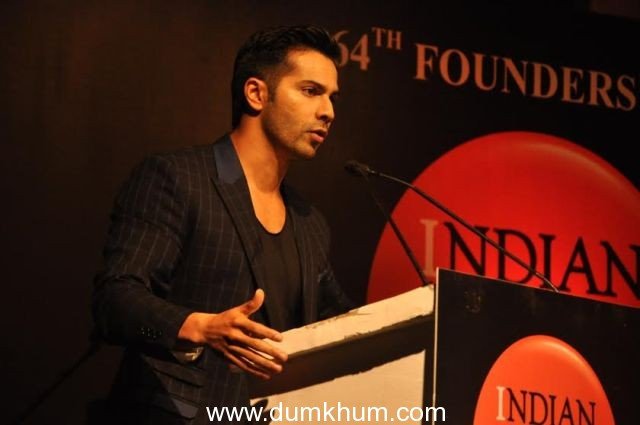 The dignitaries launched a short film on Anti-Tobacco –  ‘Be Smart. Don’t Start’, featuring Varun Dhawan. A film mainly targeted to educate the school & college goers in particular about the adverse effects of smoking. “A lot has been said about why people should not smoke. Eventually it has to be a personal decision & I realised that “Smoking Kills” at a very early age.“, “said actor Varun Dhawan.

Tobacco generally is consumed in 4 forms; smoking, chewing, application and inhalation. Intake of tobacco in any form is harmful & results in one of the highest incidence of Head & Neck Cancer or Oral Cancers in particular. For most teenagers who take up to smoking, the thrill of taking your first drag is unbeatable. Despite the coughing and choking, most continue as they believe smoking is cool – it’s a sign of growing up, girls get impressed or it’s macho to smoke. The first drag leads to an addiction that’s difficult to give up despite knowing that smoking kills or that tobacco consumption is the leading cause for cancer. Varun added: “Everyone has lost someone or knows someone, who has lost a loved one to cancer and smoking is one of the biggest causes of cancer. All I want to say is that it’s not cool to smoke. Being an actor, I might smoke on screen for a character, but I would like to say this on record, that in my personal life I stay away from smoking since it is addictive and injurious to health. My advice to each one of them out there, don’t kill your life in smoke.” “Most individuals, who smoke, have formed this habit in their teen years mainly due to peer pressure. It is believed that if an individual is not addicted to smoking in his teens or 20’s its very unlikely that he would fall victim to this habit in his late 30’s. Educating and making every one aware of the harmful effects of tobacco & helping teenagers and the younger generation kick the butt at a very early stage becomes so important.“ expressed Dr. Anil K. D’Cruz is Director at the Tata Memorial Hospital. Tobacco is sold outside schools / colleges in large number and often tempts young children / adolescents who fall victim. Easy availability, no restriction, low cost are some of the major reasons why the youngsters take to this dreadful habit of smoking. While banning tobacco may be the best long-term option, a better solution would be to educate the younger generation to the adverse effects of smoking. We must also try to include in the curriculum of young children at school, proper pictorial warning on tobacco products so as to make the most immediate and lasting effect. Measures like this have had an impact in other countries and if it can help decrease ill health and suffering and prevention of cancer, then it calls for immediate implementation.

Through this film we indent to reach out to as much audience as possible and convince them that it’s not cool to smoke and that Smoking Kills. Indian Cancer Society will shortly release this film in theatres, on television, promote it on social media platforms and take it to schools across the country. This will help to strengthen the fight against cancer and protect our future generation from going up in smoke.