The curly haired, bubbly and chirpy, Rakhi Vijan remembered fondly as Sweety, has undergone a complete make-over for &TV’s Gangaa. The actress is making a comeback of sorts with this show because her last outing on the small screen was quite short lived.

Rakhi will be seen in a key role as Prabha Mami, a loudmouth married woman with a liking for ‘bhadak’ colors. The actress will be seen wearing gaudy saris of the brightest colour. Her character will also be seen sporting funky jewelry that spells out her self-centeredness. How you ask? The jewelry has been custom-made to spell out her name! Pendant and ear-rings alike! To top this up, her character is in a relationship with the mobile phone; so much so that she swears by the number of time it rings! 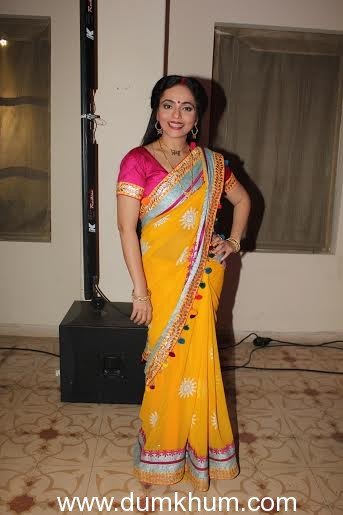 It’s not just in terms of her looks that she has had a 360° image makeover in the show. Known for her vivacious image, the actress will be seen in a negative role of an opportunist woman who’s disappointed with her husband’s humble earnings that cannot support her lavish lifestyle. But one thing that hasn’t changed about Rakhi’s portrayal is her crazy humour. Rakhi has some of the funniest lines to mouth in the show and is extremely hilarious with her remarks. So the audience can enjoy watching her in a whole new avatar in Gangaa!