J.K. Helene Curtis Ltd. (JKHC), India’s leading male grooming company, today announced its association with MARD – Men against Rape & Discrimination, an initiative conceived by Bollywood actor Farhan Akhtar to launch a special range of deodorants to support women equality. The company intends to dedicate the profits earned through this special edition of deodorants to the work done by UN WOMEN for promoting Women Equality across the world. UN Women is an initiative by the UN whose main focus has been to end violence against women in the world. Brands in the deodorant category portray women in their ads as an object of desire, which creates a strong imbalance in the society. The MARD foundation has a tough core whose large purpose is to contribute towards eliminating the heinous crimes faced by the women of today. Park Avenue deodorants, which stands for success, style & sophistication, has a lot in common with MARD and collectively aim to put a halt to violence and discrimination against women. 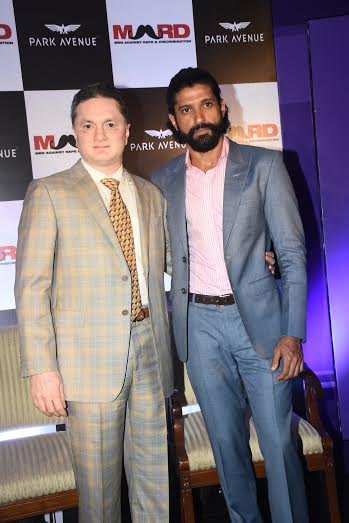 Commenting on the initiative, Gautam Hari Singhania, Chairman and Managing Director, Raymond Limited, said, “The crime against women is rising at an alarming rate and we as a company/conglomerate are cognizant of the fact. It has always been our utmost priority to provide equal opportunity for growth and protect the women of our society. I respect Farhan’s thought of eradicating the intolerable discrimination against women and am keen that the cause receives support it requires.”

Farhan Akhtar, through MARD, has very strongly vowed to spread awareness about gender inequality & rape. Women’s right has been an area which has been talked a lot about but have never received the much-needed attention. He urges the youth of today to support the cause. Commenting on the honorable cause, Bollywood superstar Farhan Akhtar, stated; “In India and across the world, there are deeply ingrained notions on how women should think and behave. MARD has been reaching out widely to men and boys to challenge these notions and raise their voice for a more gender equal world. Inspired by the outreach, the MARD-Park Avenue Deos endeavour will continue to mobilize one half of humanity, in support of the other. All profits from the partnership will help in strengthening UN Women’s work with communities to ensure safer public spaces for women and greater access to resources.”

It is the first time a deodorant brand has come up with such a sizeable initiative to fight for a cause which our country has been grappling with. Park Avenue feels that the creating awareness and working with such a foundation is what they would like to support.

Commenting on the association, Ashok Namboodiri, Business Director, JK Helene Curtis Ltd. said, “Most of the communication in the category of men’s deodorant is pertaining towards being a chic magnet and portrays women as an object of desire. The genesis of Park Avenue deodorants has always stood for codes of success, style & sophistication which is epitomized by multifaceted personality of Farhan Akhtar. We believe that brands play an equally responsible role in spreading the value’s to the consumers and we will strive to do our best to accomplish this cause.”

A purchase of the new deodorant endorsed by MARD & PARK AVENUE is a pledge towards the cause of women equality and show that real men now have a real reason for purchasing a Deodorant unlike what the category stands for. The packaging of the product has been designed with inputs personally from Farhan Akhtar and executed by advertising agency Publicis.

Established in 1964, J.K. Helene Curtis Limited is a part of the Raymond group, based on the principles of Quality, Trust, Excellence and Leadership. With over 40 years of combined experience in the Personal Grooming & Toiletries Industry, the company has built world class quality brands namely Park Avenue, Raymond, Premium,  that spans across the  Men’s Grooming and Home Care categories.

The Park Avenue range includes Fragrances, Body Care Solutions, Shaving Systems and Hair Care Solutions for the grooming needs of progressive men. All its products are developed using a high level of research to ensure that they stand the test of quality and consistency.

The dedication of the team is embellished by the fact that Park Avenue became the second largest deodorant brand in India and also was amongst the 50 Most Trusted Brands in the Brand Equity survey. Today J. K. Helene Curtis is one of the leading players in the Perfume Sprays and Body Deodorants categories and is a market leader in the Room Freshener and Eau De Cologne categories.

Men Against Rape and Discrimination or MARD is a 2013 social campaign launched by Bollywood film director and actor Farhan Akhtar. The word “MARD” has been used in the short form of the campaign name. The campaign aims to raise social awareness against rape and discrimination of women.