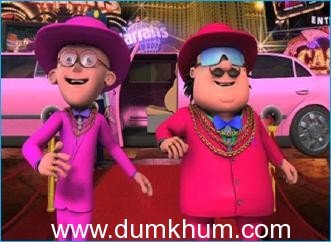 The legendary Gulzar pens lyrics for the title song; Sukhwinder Singh lends his voice to the title song and Sandesh Shandiliya composes music for the show Maya Digital Studios the company that pioneered the art & technology of animation & visual effects in India has consistently done international quality 3D animation for some of the best international studios. Come October 2012 and the company will launch its first ever 3D animated TV show for the Indian market, based on the popular characters from Lotpot comics, Motu & Patlu for Viacom 18’s Nickelodeon. Motu Patlu is a rib-tickling comedy that cuts across all age groups, premiering on October 16, 2012, daily at 6:30pm. This unique show with high quality 3D animation by Maya Digital Studios is part of Nickelodeon’s constant attempt in offering differentiated Indian content to kids. The show brings alive the classic comic stars Motu-Patlu and has stories that are deeply rooted in India. Inspired from the characters of Lot Pot Comics, Motu Patlu is a lively comic caper that is sure to engage kids as well as the entire family. Set in the beautiful city of Furfuri Nagariya, Motu and Patlu are as similar as chalk and cheese… the Awesome Twosome are always on an adventurous expedition and have an uncanny ability to get into tricky situations – every single day! Says Ketan Mehta, Chairman & Managing Director – Maya Digital Studios, “At Maya, we want to bring the best of Indian content with world class animation & believe that since animated content is the first interface of a child with entertainment content it is very important to have an Indian cultural connection with it. We are extremely happy that Nickelodeon as a channel has a similar strategy and with this show we will together create new qualitative benchmarks for kids’ entertainment in India”.

Adds Suhas Kadav, Head of the Animation Department – Maya Digital Studios, & Director of Motu Patlu, “It is an honour for me to direct India’s first ever slapstick, chase driven fun show, which is 100% Indian content for kids. With this show, we are sure that will create a standard for Indian animation and I believe that this show will continue to entertain kids and family audiences for years to come.” Apart from the fact that Motu Patlu boasts of state-of-the-art 3D animation with a hilarious pure Indian storyline, another highlight of the show is the title song which brings together the musical triumvirate of Gulzar – who is writing a kids song after many years, Sandesh Shandilya – who has composed music for the entire series including the theme song that is sung by renowned singer Sukhwinder Singh. Speaking on this occasion, Sandesh Shandilya said, “Composing the music and designing the score for a kids show; and creating music for Gulzar Saab’s words is an enriching as well as challenging experience for me. I’m sure the kids too will have as much fun viewing it”. Adds Sukhwinder Singh, “Singing for kids, on Gulzar Saab’s words for Ketan Sir’s production for a show based on Motu Patlu; frankly, I couldn’t have asked for more. I hope the kids groove to the song too, and enjoy the show”. Summarizing the journey of the song, Gulzar said, “I thoroughly enjoy myself while writing for kids. Just like my previous songs for kids, the song Motu Patlu ki Jodi too has a lot of fun and I hope everyone enjoys this song as much.” Commenting on the launch of the new show, Nina Elavia Jaipuria, Executive Vice President & Business Head, Sonic and Nickelodeon India says, “Kids are the most dynamic consumers to please and we have to keep evolving and innovating to keep them engaged. We promise kids that with Motu Patlu we will give them a show that hasn’t ever been seen in the kid’s category as yet. Motu Patlu is a path-breaking and contemporary show that will go multi-platform to connect with kids all across the country. We will make sure that the kids have a rollicking time with our crazy duo.”

Adds Anu Sikka, Vice President – Programming & Scheduling, Nickelodeon India, “Motu Patlu has great story telling, engaging characters and world class quality of animation – the 3 things that we look for in a show. Motu Patlu surpasses our expectations on all 3 parameters and we are sure that kids will love the show as much as we loved bringing it to them.”

The channel will bring Motu Patlu to the audience through a 360-degree marketing campaign consisting of multiple touch points covering ATL and BTL media vehicles. Mass media such as a cross channel television plan, print, outdoor and radio will be used. In addition, Motu Patlu will also be brought to the kids through numerous BTL activities consisting of van activations in smaller towns, mall activations and engagement in retail chains such as Pantaloons and Timezone. Innovative Motu Patlu meals will be available across Bombay Blues outlets in Mumbai. Motu Patlu will also be promoted through hobby workshops with Hobby Ideas.

In order to connect with the tech-savvy kids of today, Nickelodeon will invest in building digital assets for Motu Patlu. Kids can interact on the digital and mobile platform through numerous Motu Patlu games, contests, downloadables and a lot more on the dedicated microsite, motupatlu.in. Social media like Facebook and Twitter will also be used to keep the engagement going.

Tune in to join the Awesome Twosome – Motu Patlu in their hilarious adventures starting Monday, October 16th daily at 6:30pm, exclusively on Nickelodeon MOTU: Motu, the super funny character loves binging on samosas and dreams of an exciting and thrilling life! He has an attractive face that can only attract trouble! 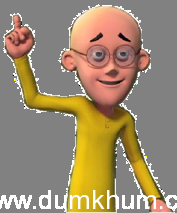 PATLU: Patlu is Motu’s best buddy and has a heart of undying friendship. His brain travels faster than the speed of light but always lands him in a soup.