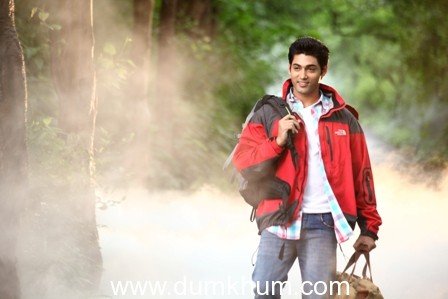 DV is lying at home wrapped in blankets and with a bit of stubble. When Dilshad walks in he looks behind her and sees no one. Dilshad shakes her head in the negative and says Saachi didn’t come. “Woh nahi aayegi DV. Tum kyon yeh zid kar rahe ho. Tumhara bukhar badh gaya hai. Let me call the doctor!” she says. DV is adamant. “Mujhe kuch nahi hoga. Aur doctor ko bulaogi toh main chala jaunga. Saachi zaroor aayegi. Usey aana hi padega!” Saachi goes to the terrace and peeks to look if DV is ok. DV is lying on his bed and is really unwell. Saachi sees Dilshad trying to give him some medicines, which he refuses to take. DV then starts coughing and is breathless. Saachi is really worried. Dilshad tells Saachi that DV’s fever has gone to 103 and that he is delirious. Saachi says she should give him a cold compress and if the fever doesn’t go down take him to the hospital. Dilshad gets angry. “Take him to the hospital??? What is wrong with you? What has gotten into you? Yeh case haarne ki sazaa de rahi ho usey yaa kisi aur cheez ki?” Dilshad says, “Aise waqt mein log dushmanon ki madad bhi kar lete hain… Aur DV toh dost hai!” But Saachi looks uncompromising. Dilshad shuts the light in Dv’s room and walks down. Saachi enters Dv’s room and finds that he has high fever and he is unconscious. Saachi takes the cold compress and starts to nurse him. In the morning Dv opens his eyes to see Saachi. Saachi is a bit relieved but gets back to being her strict self. Dilshad comes in and Saachi instructs her on what to do next. As Saachi is walking away Dv calls out to her and says, “Ab bhi kahogi ke tumhe mujhse pyar nahi hai?” Saachi walks out in a huff. Saachi meets Dilshad to ask her to intervene on Saachi’s behalf (we could catch the scene midway where Saachi has told Dilshad everything). Dilshad tells Saachi that she knows. Saachi asks her how could she encourage such a thing. Dilshad says she finds nothing wrong in it. Dilshad pleads with Saachi that love knocks on the door only once and that she will be a fool to let go of it. Saachi walks off in a huff. DV’s phone rings and it says, `sweetheart’. DV has a conversation with his mother who is now revealed. She keeps telling him to come back and is quite surprised that something has held him back for so long. “Dus din se zyada toh kisi cheez se nahi bandhte… Is baar kya ho gaya?” Dv smiles and says, “Is baar shayad poore janam ko bandh jaunga!” DV mother is puzzled and asks him forthright if it is some romance ka chakkar. DV is evasive and that’s when the mother warns him. “Mazaak tak theek hai DV lekin tum jaante ho kis tarah ka parivar hai hamara… Jazbaat aur zimmedariyon mein yahan jeet sirf zimmedariyon ki hoti hai… Toh kisi ko woh ummeed mat do jisey tum poora nahi kar saktey!” DV is pensive.

Ulka comes to Aaji and Nani and gives them the gossip that DV has vanished and that Dilshad is distraught. Ulka says good riddance to bad rubbish because it was only a matter of time before DV would create problems in the area. Saachi walks in at that moment and hears Ulka. Saachi is concerned about what must have happened. Saachi goes upstairs and takes her phone. She scrolls down to DV and tries to call him. The phone is switched off. Saachi then dials Dilshad who explains to saachi that DV just left without taking his stuff or saying anything. Dilshad says she has a bad feeling about this. Saachi is making tea for Aaji and Nani when she keeps a third cup in the tray and brings it. When Aaji asks her who it is for Saachi gets awkward. DV asking her to pilao her a cup of tea every morning. Saachi puts the cup away as Aaji starts speaking to her about how rude she was to DV. Nani also mentions that it is quite out of character for her to lash out at him. “Madad hi toh kar raha tha hamari!” says Nani. Saachi avoids further conversation and leaves for work. Saachi tries to start her jeep when suddenly she sees DV standing in front smiling. “Kya hua? Daddu beemar hain?” asks DV and when Saachi looks up he is not there. Saachi drives the jeep away. Saachi is driving the jeep when she sees a person asking for a lift and she remembers DV’s first meeting with her. Saachi almost smiles when suddenly a truck comes from the opposite end and she swerves to the side of the road only to get flashes of DV and her earlier incident where they walked home with files in the rain. Saachi reaches the office when Mugdha says someone is waiting for her in her office. Saachi reaches there and the chair swerves towards her and it’s someone else. Saachi gets a flash of DV’s first meeting in the office with her. Dilshad comes running to Saachi’s house. Dilshad is crying as she says the cops called her. They found DV’s wallet on an accident victim who is dead. Saachi is shocked. A distraught Dilshad and Saachi enter the hospital (or wherever the body is) for identification. Dilshad blames Saachi for this situation and Saachi silently bears the guilt. The drama plays out where the dead body is shown and Dilshad is relieved that it’s not DV. Saachi and Dilshad come out of the hospital to see DV standing there. Saachi is relieved and starts to weep out of relief and vulnerability.  At the same time she starts to fire Dv for leaving without saying anything. DV is amused as he says he had just gone to be alone and clear his head. Saachi doesn’t allow him to finish. “Thank god you are alive… Oh my god! I’m so glad you are alive!” In an emotional state Saachi goes close to DV and embraces him. DV holds her tight and smiles, “And you said you don’t care about me!” Saachi continues to cry holding on to DV as Dilshad watches them both.