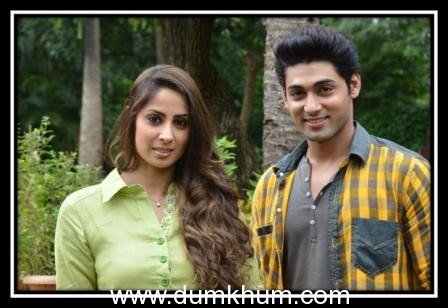 Episode 62, 2ND December, Monday @ 9.30 p.m. –  Deepali explains Ajji Dhruv  is right guy for Saanchi. Adu informs Dhruv and Dilshaad that Saanchi is agreed to get married to a man who is divorcee and father of 2 children. Dilshaad confronts Saanchi. Dhruv drags Saanchi and takes her in front of Ajji Nani. Dhruv confronts Ajji nani. Saanchi gets angry when Dhruv crosses his limits and keeps questioning Ajji Nani. Saanchi slaps him and throws him out of the house. Dilshaad gets angry and says Dhruv does not deserve such rude behavior. She walks away. Saanchi goes to her room and breaks down. Dhruv gets flashes of good moments with Saanchi and bursts out crying. Dhruv’s mother calls him and tells him to come back home. Next morning Saanchi tries to be normal and like always asks everyone what they would want to eat. Nani tells her she can’t pretend to be happy. Saanchi prays to God that may her family be happy like before. Dhruv packs his bag. Dilshaad cries. DV tells Dilshaad to take care of Saanchi. Dilshaad says she can’t promise. Dhruv looks at Prabhu Niwas with a hope Saanchi will come to stop him. Saanchi comes and hugs him and says Iam sorry please don’t go.

Episode 63, 3rd December, Tuesday @ 9.30 p.m. – Dhruv realizes he was just dreaming when doesn’t find Saanchi around. Dhruv enters Prabhu nivas. He says bye and asks for Ajji Nani’s blessings. Saanchi watches him going. She cries and runs to her room. Nani feels bad for Dhruv. She decides to leave the house. Dhruv walks out of the house and overhear some colony bad guys talking bad about Saanchi. Dhruv gets into fight with them for Saanchi’s respect. Everyone come out. Adu tries to help Dhruv but he says he can handle them on his own. Saanchi comes down running. Dhruv gets badly injured. He walks away to go. Saanchi wants to stop him. Ajji is holding her hand. Saanchi literally pleads Ajji to stop him. Adu also requests. Ajji slowly loosens the grip and says go Saanchi stop him. Saanchi stops him and Dhruv in excitement goes to hug her but Saanchi steps back. All laugh.

Episode 64, 4th December, Wednesday @ 9.30p.m.-  Saanchi applies medicine on DV. Ulka comes. Everyone hide cover Dhruv. They all make fun of Ulka. Ulka is shocked to know Ajji has agreed to get Saanchi married to younger boy Dhruv. Dhruv assures he will take care of Saanchi always. Pradeep comes to Saanchi office drunk. Mughda calls up Saanchi and informs her. Saanchi and Dhruv come to office. Dhruv and Pradeep argue. Dhruv says Pradeep has forged papers and he will prove it in court. Saanchi takes out all the agreements and contract papers. Dhruv disturbs her by being very romantic. Dhruv asks Saanchi out for Date. Saanchi says Ajji will never agree. Ajji tells Dhruv to speak to his parents about marriage and after that only he can take Saanchi out for a Date. Dhruv decides to have a date with Saanchi no matter what and smiles.

Episode 65, 5th December, Thursday @ 9.30 p.m. – Dilshaad calls Saanchi home to get the right recipe of Biryani. When Saanchi reaches home she gets to know Dhruv has called for Pizza. Dilshaad pushes Saanchi in Dhruv’s room. Dhruv has created an atmosphere of romantic date in his room. He has arranged TV, popcorn tub, Pizza, Candles etc. Saanchi shares her idea of romance and takes him to park. They both enjoy open sky, twinkling stars, colourful flowers etc. Dhruv gets his mother’s call. She says his father wants him to attend Ram kapoor’s Party. Dhruv agrees. He decides to take saachi along. Ajji also gives permission only if Adu accompanies them. Dhruv tells Saanchi only two of them will go to Mumbai. He will talk to Adu.