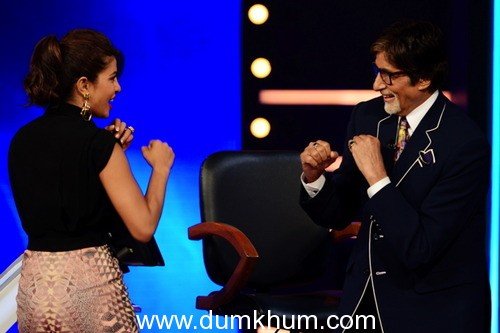 The gorgeous Priyanka Chopra recently graced television show ‘Kaun Banega Crorepati’ hosted by megastar Amitabh Bachchan. The actress was present on the episode especially titled ‘Housalebaaz’ along with a few women who personify this title: The RED BRIGADE of young girls! Troubled, abused but never weak, they fought back to emerge stronger, impressing even Amitabh Bachchan!

In the episode, the national award winning actress who appears in and as the world champion boxer in the film ‘Mary Kom’ played the quiz on behalf of ‘The Red Brigade’. Red Brigade is a group of women trained in self defence who work towards the vision of a better society. The winning sum went towards the building of a self defence academy for girls in India. 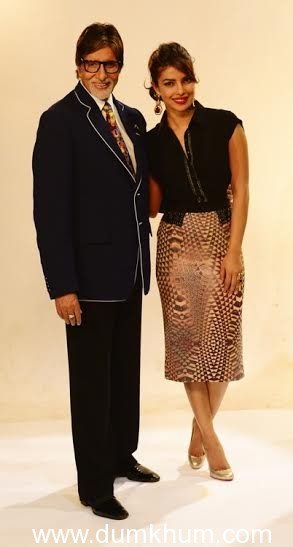 Amitabh Bachchan and Priyanka Chopra exchanged tips about boxing and spoke at length about the NGO. The Superstar of Bollywood was left in awe of Usha Vishwakarma, the founder of The Red Brigade and her struggles in life comparing her to Priyanka Chopra’s character in the film.

‘Mary Kom’, the film is about the Indian Boxer and Olympic Bronze medallist MC Mary Kom. Depicting her life, struggles, family and her perseverance to be the best – Priyanka Chopra stars as Mary Kom along with Darshan Kumaar, Sunil Thapa, Shishir Sharma and American actor Zachary Coffin. This special episode will be aired on 4th of September 2014 on Sony Entertainment Channel.