Get ready for a laughter ride along with Akshay Kumar in ‘Entertainment’ only on Zee Cinema! Starring Akshay Kumar and Tamannah Bhatia, the romantic comedy will air this Saturday, 4th April at 9 PM only on Zee Cinema! 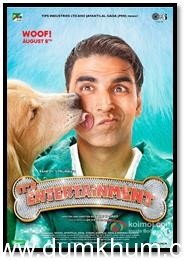 Save your date with Zee Cinema this weekend as India’s favourite movie channel is set to provide some comic relief to its viewers. Get ready for ‘Entertainment’ starring most unusual Bollywood Jodi – Akshay Kumar and Tamannah Bhatia along with the most loveable Dog -Entertainment! A perfect family entertainer, the movie promises an all-encompassing movie-viewing experience – comedy, romance, suspense, drama and watch out for – a cute pet dog called ‘Entertainment’!

When Akhil (Akshay Kumar) falls in love with Saakshi (Tamannah Bhatia), they decide to get married but her father will allow it only if he is wealthy. Akhil, who now desperately starts looking for a solution to earn big bucks, discovers that he is adopted and that his real father is a billionaire in Bangkok. There starts his journey to Bangkok. Upon reaching Bangkok, Akhil gets to know that his father is dead, leaving his property worth 3000 crore and money to his dog ‘Entertainment’. All hell breaks loose when Akhil and his father’s cousins – Karan (Prakash Raj) and Arjun (Sonu Sood) who escape jail are all vying the property with plans of their own, resulting in a comic turn of events.

Will Akhil finally get all that has been his right all along? Or will his father’s cousins succeed in getting their hands on all the riches? Will Akhil be able to marry Saakshi? What about Entertainment?

Tune-in to Zee Cinema to catch ‘Entertainment’ movie for all the fun and excitement on Saturday, 4th April at 9 PM only on Zee Cinema!