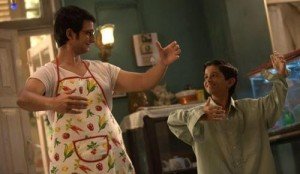 Could have been a Great Ferrari Ki Sawari !

Most of the time when you are watching a film, you just go and sit through it, because most of the times its mindless and devoid of any logic and you very well know what you are going through and don’t even mind it, because you’ve as it is left it at home.

But when you go and watch a film which had all the creative minds working on it you start wondering as to why these same people who have given some really thought provoking and full on entertainment cinema, should succumb to the same gimmicks which most of the makers are already  using it.

Now just analyze “Ferrari Ki Sawari”, but before that let me make one thing very clear, that the intentions of the makers were very noble, clear and positive. Very good clean cinema and a great message also, that if you have a dream and are also talented than you can achieve anything.

Now lets begin with the storyline which is very thin and no wonder It took 3 long years to complete the script, because there is no scope none whatsoever, that is why its surprising that the creative writer team of Vidhu Vinod Chopra and director Rajesh Mapuskar could not gauge at the outset, and than there was Raju Hirani who is also the creative producer besides being the dialogue writer, could not realize the futility of dragging the subject no end. The basic premise…. a typical Parsi, middle class set up, where there is no housewife or woman in the family. Here the father Rusy (Sharman Joshi), head clerk at the Worli RTO office, is a doting parent taking care of his son like a mother does. Rusy’s father Deboo aka M0ta Papa (Boman Irani), was a renowned cricketer, some 38 years back and played for Ranji Trophy. But his career was short lived out of jealousy and cheating by his very close friend Dharmadhkari played by Paresh Rawal. That accident and deception virtually crippled him for the rest of his life and confined him to his home.

But it was his grandson Kayo’s craze for the game of cricket that made him get out of his cocoon and be an angel figure for him.

There are series of situations which virtually takes a toll on your reasoning and sensibility. Kayo (Ritvik Sohore), qualifies for a training camp to be held at theMeccaof Cricket “The Lords” inUK. Now one and a half lac rupees is the required amount and the doting and dutiful father Rusy goes about hunting for it. Very much citibred he acts like a hopeless desperado. His chasing the loan officer from a Bank with all the medals and certificates to get a loan and than through some incredulous idea from a known colleague (Seema Pahwa) a wedding planner, who needs a Ferrari for a clownish corporators son’s wedding for a day and if he could manage, than she was ready to shell out the money to Rusy. Now Rusy who goes to meet Mr. Sachin Tendulkar, is blessed straightaway with the keys of the dream car Ferrari by accident coincidentally, you can say. Now having got the dream car – task accomplished – got money in hand and just imagine he puts the money in the drawer of the dream car instead of in his pockets ! A ploy which filmmakers generally use to extend the drama and in this case it had to be nearly two and half hours.

Now the Ferrari gone, the caretakers of the Tendulkar house and garage go about fooling around and searching for the Red Hot Ferrari, like a pack of Jokers and here Rusy with Ferrari, leaves it stranded, and the great Ferrari gets towed away and the drama goes on and on with Tatya’s and Pakya’s unending antics. Wonders of wonders in all this chaos and madness Ferrari gets ferried around and God Bless! Not a single scratch!!!

Thank God ultimately the boy Kayo does go to Lords and everyone is crying, and rejoicing.

Why this outburst, because the film could have been a masterpiece, had it not been for the clichéd elements which were incorporated impromptu. Power packed performance from Mota Papa Boman Irani who is just not allowing to give any which way and gets into the skin of the character. Sharman Joshi as Rusy is just brilliant and his projection of a goody goody, simpleton, a good hearted soul and God’s person is near to perfection. His cry and plea for his lost son is just too true to be true. A fathers love and concern for his son will make you cry come what may! Ritvik Sohore as Kayo is an amazing discovery and has given a sterling performance. Vidya Balan’s item number gets lost in the Ferrari Frenzy!
Ferrari Ki Sawari was considered as a financial suicide by many, but still Vidhu Vinod Chopra decided to produce it going by the conviction of the director Mapuskar and the selection of the lead protagonist in Sharman Joshi, Boman Irani and prodigal child in Ritvik Sohore, and director Rajesh Mapuskar did his level best in extracting some power packed performances from his ensemble cast, and for someone whose only experience was being assistant on Munnabhai Series and 3 Idiots, this indeed is a commendable debut. But my only problem is like I have mentioned that “Ferrari Ki Sawari” could have been a masterpiece!!!