This Friday a young girl with big aspirations Ruhi, essayed by the admirable (Pratyusha Banerjee) steals the limelight on Pyaar Tune Kya Kiya as she follows her heart to the city of dreams, Mumbai! But here when she finds true love, does she do everything to keep it or will her career take priority?

Ruhi leaves her hometown as she seeks to achieve her everlasting dream of acting in Bollywood. But will forsaking home and going against her parent’s wishes lead her to doom? Tune into this hopeful encounter with fate as Ruhi takes matter into her own hands at 7 pm, only on Zing!

Ruhi, an engineer by education, had a big Bollywood fantasy. She wanted to achieve stardom and would not let anything or anyone get in her way. Thus upon graduation, much against the wishes of her family she picked up her belongings and left to follow her heart. That was the last she would set foot in Chandigarh, the town she once called home. Upon her arrival in Mumbai, the city of dreams, she was all alone and sought comfort in the home of a friend, Neelam (Preeti Bajpai). Here Ruhi starts auditioning and visiting television sets in her hopes to get noticed. In her struggle to make her dream a reality, Neelam introduces Ruhi to Rajat (Kunal Bhatia). One look at him and Ruhi falls head over heels and deeply in love! Few may call it love at first sight but young love blossoms. However as Ruhi invests heavily in her love life, her auditions take the back seat as she’s never left with any time. Is this what she came to Mumbai for? Will she be willing to give up her lifelong dream in the hopes of saving love? Or will Ruhi be able to have her pie and eat it too? 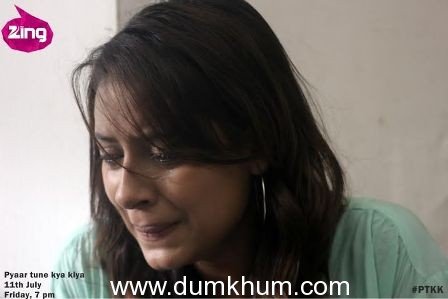 Tune in as Ruhi struggles to makes the most difficult decision,

Zing is a youth channel first launched in 1997. Predominantly a music channel called Music Asia; it was relaunched as Zee Muzic in 2000 and finally repacked as Zing in 2009. Since then it has catered to youth across India, showcasing film previews, music launches, celebrity gossip, music and much more. The channel has recently widened its reach to Australia, New Zealand, Bangladesh, Fiji, Hong Kong, Indonesia, Philippines, Sri Lanka, Japan, Maldives, Thailand& Middle East.