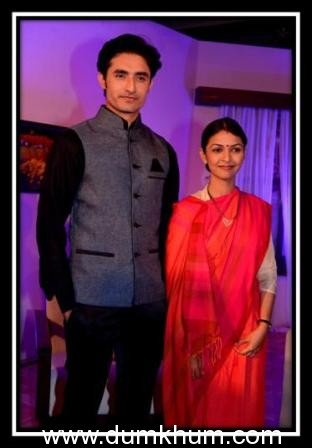 6th January, Monday, Episode 54 – Rajveer tries to tell the whole truth to Nandini, but gets interrupted by Gayatri, who convinces him to not say anything to her yet. Rajveer and Nandini reach back home. Rajveer unable to handle his mounting guilt tells Gayatri to tell the truth the next morning. Gayatri is shocked, but is left with no other alternative. She asks Abhay to do something about this. Rajveer looks for Nandini the next day expecting that Gayatri must have told her the truth, but gets to know she hasn’t and Abhay has ensured that Nandini stays away from home by sacking her brother from the job. Rajveer rectofies it and on his way back with Nandini, shows her the project pandey file.

7th January, Tuesday, Episode 55– Rajveer tells Nandini the whole truth and she is shocked. On knowing it was Gayatri & Abhay’s plan, she goes to them. Abhay, who is telling her about an important political rally organized for Rajveer, informs her that there is a threat. Gayatri still feels he should be sent to the rally, which is shocking to Nandini. Nandini confronts Gayatri and questions her on why did she play with her life. Nandini starts packing her bag to leave, when Rajveer comes and apologizes for all that he has done. She says she will try to forgive him, an emotional conversation between the two. Nandini leaves with her stuff and eaves behind everything she got the Raghuvanshis.

8th January, Wednesday, Episode 56 –   Nandini comes down with her packed bag and Ambika enquires about her reason for leaving. She tells her that Gayatri has answers to your questions and leaves. Gayatri says it’s just a fight between Rajveer & Nandini and nothing else. Rajveer is shocked to hear her lie again. He confronts her but Gayatri asks him to leave for the rally. Rajveer goes to Jeena and gets to know the truth about her that she is with him only for money. Rajveer is on his way to the rally. Nandini sees this on TV and gets worried knowing that there is security threat.

9th January, Thursday, Episode 57 – Nandini calls Gayatri but Gayatri tells her that she has no right to talk in the family matters now that she has left. She tries Rajveer’s number only to find it switched off. Nandini rushes immediately for the venue leaving her parents puzzled. Rajveer reaches the rally and addresses the people. A shooter is aiming at Rajveer but he is not able to succeed as Rajveer is sorrounded by people. Nandini somehow reaches the location and rushes looking for Rajveer and any sign of threat. She spots the shooter aiming at Rajveer.

10th January , Friday, Episode 58 –  At the last minute, Nandini pushes Rajveer but the bullet touches his hand and goes. He gets a deep injury and faints on the spot. Nandini is shocked and calls for medical help, pointing at the shooter at the same time. Rajveer is immediately brought to the hospital. Ambika scolds Gayatri for her carelessness yet again. The whole family rushes to the hospital. Nandini is already present and Ambika appreciates her efforts to save Rajveer. Doctor says he has suffered a deep injury and lot of blood loss, but now he is stable. They keep him for a day under observation. Nandini supports him throughout and Gayatri sees this working in her favour.

Tune in Desh Ki Beti Nandini from Monday to Friday 9 pm only on Sony Entertainment Television.