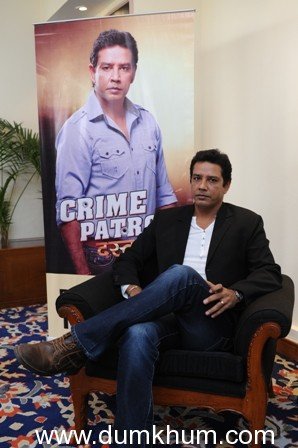 In the wake of so called Godmen being exposed by the media, Crime Patrol brings you the story of aNother quack who not only duped innocent people but also committed crime as heinous as murder.The protagonist in this story Baba Rajasagi (who used innumerable aliases) tells innocent people that he has seen a dream of god telling him to build a temple in the village. The innocent people dole out money as donation for the purpose and then the baba vanishes. Devotees believe he is praying in isolation and would turn up one day to keep his word. Unknown to them, the baba is being searched for the Pune Police, who also have to no clue to who the baba is except six phone numbers that the baba was using. As a matter of fact the police were searching the baba for a double murder, that of a woman Rohini and her 5 year old daughter Chanda. The house where the bodies are found in a chawl, belongs to Gokul Daware who had given it on rent to Baba Rajasagi. And now Baba Rajasagi is absconding. No one in the chawl has his photograph. What were Rohini and Chanda doing in Baba’s house? Rohini’s father, Amardev a construction laborer reveals his family is devoted to Baba and Rohini was taking care of Baba in the house. Following a tip off, the police reach a jewelery shop, where according to one of the chawl dwellers, Lalit Rokade, Baba Rajasagi had pawned a gold necklace five days back. From the shop, the police find a CCTV grab of Baba Rajasagi, the first clue to what he looks like. In the meanwhile Rohini’s father, Amardev reveals that his younger daughter Darshita has baba’s numbers. There are three numbers from which the baba used to communicate all of them now switched off or disconnected. Where did Amardev meet Baba? Amardev reveals that he belongs to Banauli(a fictitious name) village near Pune and Baba had come to the village at the behest of Atul, another villager from Banauli. Atul reveals that he had met Baba in a bus on his way to his brother’s home and was charmed by Baba that is why he had invited Baba to Banauli and there Amardev too invited Baba to his home. From Atul, the police find three more telephone numbers of the Baba, which too turn out to be disconnected. While the police are tracing the numbers, Darshita, younger sister of the deceased Rohini, reveals that the necklace that the baba had pawned belongs to her. Her father had taken it from her to give it to Baba.  Darshita further reveals that her sister Rohini had married Baba. The police are shocked. The baba is a 60 year old man and Rohini is 30 years old. They catch hold of Amardev and question him sternly. Amardev reveals that Baba used to help him with money while in his village. Baba had proclaimed that he had a lot of land, ashrams and money in various places- Vadodara, Shirdi, Indore and many more. Amardev, used to take money from Baba when he was at his house in the village. After that when Baba left, Amardev wanted to Baba to give his family shelter at one of his ashrams. But Baba always evaded it and then turned up in Pune. At this point, one day Baba proposed to Amardev, wanting to marry Rohini. Amardev was shocked but Rohini also consented. So he gave in. Amardev was in desperate need to money but Baba didn’t have any. So Amardev, suggested that he would give Baba, his daughter Darshita’s necklace which Baba would pawn and then share the money. After Baba received money from his bhakts he would get back the necklace. The police are quite baffled as to who this Baba is and the Baba on the other hand continues duping innocent people in another village, with his same dream. As far as the six phone numbers which were being used by the Baba, were concerned, the police discover that these numbers belong to six different people in Nashik, Mumbai, Bhopal, Kolhapur, Indore and Bangalore. All the six people who owned these numbers, claim that the baba is a benevolent soul and they purchased him the sim card so that they can be in touch with him. Interestingly, all these six people know the baba with different names viz Vardaraj baba, Loknathan baba, Namdev baba, Yagyaraj baba, Srisaarthak baba and Kiratkarya baba, respectively. From the six phone records the police zero in on one Anubha from Surat, Gujarat who has been in regular touch with Baba. Anubha reveals that the baba is a father figure to her and she knows the baba as Ugreshwar baba. Though she doesn’t know where the baba is right now. The Baba in the meanwhile is masquerading as Jaidev Baba. He calls up Amardev from a newly procured phone set and sim card and asks him about the wellbeing of Rohini and Chanda. An aghast Amardev accuses Baba of having killed his daughter and granddaughter but to his surprise Baba accuses Amardev of committing the crime himself and trying to palm it off in his (Baba’s) name.

Who is telling the truth? Who is this Baba?

In the wake of so called Godmen being exposed by the media, Crime Patrol brings you the story of another quack who not only duped innocent people but also committed crime as heinous as murder. This is the second and concluding part of the story. The protagonist in this story Baba Rajasagi (who used innumerable aliases viz Vardaraj baba, Loknathan baba, Namdev baba, Yagyaraj baba, Srisaarthak baba and Kiratkarya baba, respectively) not only duped innocent villagers but also killed a woman Rohini and her 5 year old daughter Chanda. The Baba who is in the run acquires a new name viz Jaidev Baba and calls up Amardev from a newly procured phone and sim card and asks him about the whereabouts of Rohini and Chanda. An aghast Amardev accuses Baba of having killed his daughter and granddaughter but to his surprise Baba accuses Amardev of committing the crime himself and trying to palm it off in his (Baba’s) name. Who is telling the truth? Who is this Baba?   The investigating police grilled Amardev for his alleged involvement in the murder but he denied vehemently. The police in the meanwhile learnt that the accused Baba made that call from Ambergaon. On reaching Ambergaon the police learnt that here also the Baba was duping innocent people and had vanished from there as well. The police put Baba’s phone on radar and realize that he was moving from Ambergaon to Nandurbar and Nandurbar to Akola. Finally Baba’s position was tracked down to Varanasi, Uttar Pradesh from where he again called up Amardev and inquired about the whereabouts of Rohini and Chanda. This second phone call from Varanasi opened up a new thrust to the search for the baba. At the same time it raised the question i.e. why was the Baba constantly calling Amardev and inquiring about Rohini and Chanda, the two people who were murdered? Was he innocent or was it some guilt that was troubling him? A police team in the meanwhile rushed to Varanasi and managed to arrest the Baba from a dingy guesthouse. Once in the police custody Baba didn’t have any option but to reveal his real identity, the truth behind his attire and the crimes he committed. According to him he was born Mallikarjun Mudiraj a poor man from Belgaum (Karnataka), living a hand to mouth existence with nothing to eat and no place to live. One cold night, he stole cloths, kamandal and a mala from a sleeping Sadhu and wore them. People mistook him for a Sadhu and began to offer him food and money and that’s how he became a Sadhu Baba himself. He began to roam around as a Sadhu baba and reached Nashik where he met a soothsayer who told him about the seven chakras that could bring prosperity to him. The soothsayer also told him that only the dead could make him see the seven chakras. The investigating police in the meanwhile suspect the baba could be involved in more crimes in the past and rushed a team to Belgaum to ascertain his credentials. There they managed to trace Baba’s cousin Chandrababu Mudiraj who informed that 20 years back Mallikarjun’s (Baba) wife Shobha and elder daughter Urja had disappeared mysteriously while his younger daughter Rashi was raised by him on request of her father Mallikarjun (Baba) who was unable to raise her. On being grilled about his wife Shobha and elder daughter Urja, Mallikarjun admitted that he had killed them because he was unable to provide them with two square meals. He could not kill Rashi because she was too young. He also admitted to have cut open his wife’s stomach to look for the seven chakras as told by the soothsayer. During further grilling Baba revealed that afterward he met one Naina at Sholapur.  According to him he fell in love with Naina and ended up marrying her, only to realize that Naina and her mother were frauds. Naina had in fact married several times and had duped all her husbands. She was asking (the Baba) for money and equal partnership in his land and ashram, which he never had. Naina threatened the Baba of dire consequences but he somehow managed to escape from her clutches. From Sholapur the baba landed at Amardev’s village Banauli and married his daughter Rohini who according to him had fallen in love with him in spite of 30-year age gap. But Rohini too did a Naina to the Baba asked him to put her name in all his fictitious properties, therefore he killed her and her daughter Chanda.