COLORS’ Mission Sapne returns to make a difference that counts Produced by Sobo Films, Mission Sapne will touch lives starting 17th January 2016, every Sunday at 11:00 AM ~

It’s rightly said that ‘Where there is a will; there is always a way’. And with the second edition of Mission Sapne on COLORS, this ‘way’ is becoming more pronounced for 10 commoners who are faced with adversities in their personal lives. In its second edition, Mission Sapne provides dramatic entertainment with a strong social message as entertainers from different industries willingly live the common man’s professional life for a day. Setting stage to make a difference that counts, Mission Sapne Season 2, is all-set to charge forward with enhanced passion, zeal and commitment from celebrities, starting 17th January 2016, every Sunday at 11:00 AM on COLORS. Produced by Sobo Films, Mission Sapne Season 2 will feature 10 celebrated entertainers who will showcase their talent as they work their magic to learn the professional ongoings and tricks of the trade to raise funds in support of a deserving commoner. The carefully chosen people’s prayers will get answered as the celebrities pull out all stops with their talent, wit and star persona to ensure that business does well; delivering a very personalized happily ever after. Along with some strenuous hard work, celebrities will further raise the entertainment quotient through impromptu activities like gully cricket, song and dance-led requests, special tips, reciting blockbuster dialogues, comedy and mimicry, selfies, on-the-spot competitions, dares and challenges, that eager fans might bring their way in the hopes of earning more money for their cause. Speaking about the show, Raj Nayak, CEO – COLORS, said, “Following a stupendous response to Season 1 of Mission Sapne, it is time to charge ahead with an all-new set of celebrities who have displayed extraordinary passion and commitment towards bettering lives that deserve a helping hand. Their willingness to become a fish out of water to aid humanity sends out a strong social message; entirely in sync with COLORS’ mantra of providing dramatic entertainment avenues to viewers. We would like to express our gratitude to the entertainment industry for extending their pro-bono support, standing up for humanity, and elevating the show’s impact on deserving lives manifold. With Mission Sapne Season 2, and Chhoti Anandi, launching on 17th January, we are looking forward to setting up a robust Sunday morning audience with content that speaks volumes through its diversity and impact.” Commenting on the second edition of the show, Smruti Shinde, Director – Sobo Films said, “Changing the life of the common man by giving them a helping hand to realise their dreams is the USP of Mission Sapne. While we achieved that to a great extent in Season 1, with Mission Sapne Season 2 we are looking forward to magnifying the effect of positivity and hope in making a difference in the lives of those in need. ‘Mission….abhi jaari hai!’” 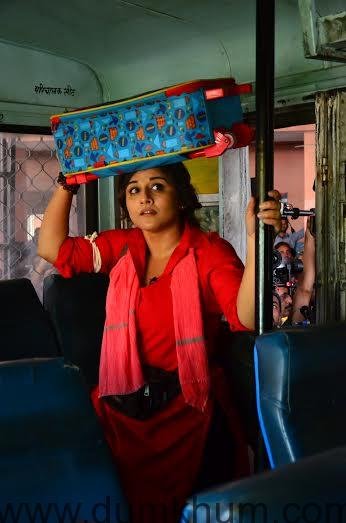 The first episode of the season will feature versatile actor Vidya Balan as she steps into the shoes of Manju, Jaipur’s only female porter. Donning the hat of a coolie and moving travellers’ luggage across Jaipur’s Sindhi Camp Bus Stand, Vidya will leverage her star power to raise funds for, single mother and breadwinner, Manju’s benefit. Be it taking tips from Manju on how to effectively carry heavy luggage from one point to another, or inviting Jaipur locals to support her cause, Vidya tries her hand at it all. In fact, the actor will even be seen climbing atop a bus and mingling with the male coolies at the bus stand to ensure that she is able to maximize her one-day time limit and turn messiah for Manju. Commenting on her experience, Vidya said, “I was extremely touched when an old woman who sells combs at the bus station came up to me and appreciated my efforts. She said that she left her customers unattended because she wanted to click a picture with me. She gave me 10 rupees and tons of blessings and it simply made my day. I salute Manju for her determination and will power with which she does her job so brilliantly.” Mission Sapne Season 2 will see actor Sonali Bendre return as the host for the second season in a row as she narrates the awe-inspiring success stories of the one-day professional endeavours of celebrities and the person they will be supporting. The title track of the show has been adapted by versatile singer Sonu Nigam whose unique rendition promises to tug at the heartstrings of audiences. For Mission Sapne Season 2, COLORS has roped in Idea Cellular as the Associate Sponsor. The show will also be promoted across mediums through an integrated marketing approach and digital initiatives.