Aaj Tak wins the Best Hindi News Channel Award at the ITA Awards for the 12th year in a row. 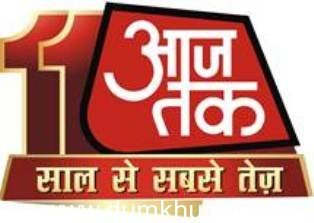 The Indian Television Academy Awards, also known as the (ITA Awards) saw Aaj Tak, the undisputed leader in News Television taking home the coveted Best Hindi News Channel Award. Aaj Tak has been bestowed with the honour for the last 12 years in a row. With an unmatched hold on the Indian news audience and many ground breaking serious news stories to its credit, this year was no different. The prestigious award was received by Mr. Supriya Prasad, Managing Editor of Aaj Tak.

The channel has been a leader not just with the Awards, but has also maintained the leadership both as per the latest TAM ratings and IRS results. As per the latest TAM results, the channel achieved the distinction of being at the numero uno position for uninterrupted straight 52 weeks in a row (All India, TG-CS 15+). Also the year saw Aaj Tak being declared as the India’s most trusted TV Brand (Source: Brand Trust Report)

Commenting on the occasion, India today Group Chairman Mr. Aroon Purie, said, “With every passing year, Aaj Tak has been raising the bar when it comes to journalistic excellence and the Award this year too is a testimony of our viewers trust and preference. At the group, we nurture fearless journalism and an uncompromising commitment to integrity of news coverage. We have been living upto this promise for 12 years now and this award lends us a great occasion to renew our faith and the will to keep leading the way”

Mr. Ashish Bagga, Group CEO, India today Group added, ‘The trust and the serious following that Aaj Tak enjoys with the viewers is phenomenal and is something that we’re very proud of. We are committed to keep improving upon ourselves. Shifting into the new state of the art studios will strengthen our presentation further and make the offering in line with the best global standards.

Driven by innovative programming this year, Aaj Tak has been setting the news agenda for the industry. Exemplary coverage during this period around Inflation, Coal-gate, London Olympics, Team Anna and Baba Ramdev’s campaigns against corruption, presidential elections, the communal violence and threat to people from north east India, T20 World Cup, 100th century of Sachin, IPL, shooting at the US Gurdwara, Geetika Sharma suicide case, Floods in North India, FDI in India, Fuel price hike, UP Election besides other significant coverage have helped the channel retain the top position increasing the Margin of leadership.

While receiving the award on behalf on Aaj Tak team, Supriya Prasad, Managing Editor said, “The award is the reflection of hard work and dynamism of the entire team at Aaj Tak under the leadership of Mr. Aroon Purie (Chairman & Editor-in-chief, India Today Group). What makes this award special is the fact that Aaj Tak has won it twelve times in-a-row. I would like to congratulate the entire team of Aaj Tak and our viewers, who have always entrusted faith in our news channel.”