In today’s time it is either the director of the film who cannot hold the film
for 2 hrs or he has too many stories to tell. In ‘Life Ki Toh Lag Gayi’- the
Director has handled four stories in the time frame of a single day-24 hrs in
the city of Mumbai.
Rakesh Mehta, who is also the story, screenplay
& dialogue writer, has been able to somehow manage a momentum by
unfolding few crazy stories all true to life –because that happens to be the
case scenario of stressful & angst ridden city of Mumbai. After his critically
acclaimed “Khuda Khushi” four years back, Life Ki Toh Lag Gayi Seems
to be a debut of sorts with all the settings & trappings of a commercial
Hindi cinema. But not the one to give in to the gimmicks of the same,
Rakesh Mehta has treated the subjects as it is. One common factor among
the four protagonists happens to be that all are good human beings as they
appear & seen confronting all the wrong people in their pursuit to fight
their lost causes. Four stories running simultaneously does create some
sort of confusion but seen in its perspective does appear quite plausible &
vulnerable as the graph moves up. Of all the four main protagonists, salman
(Kay Kay Menon) – does his bit, but nothing more, his motif of avenging his
innocent mother’s murder does not offer much to do.

The second story of girls doesn’t have much to do either. Dolly Saluja (Neha
Bhasin).

The two standouts among the four are Amol Ganguly (Ranvir Shorey)
heartbroken NRI & his friend Ajay Ghosh (Pradhuman Singh) who really
excels in their characterization.

the momentum & spirit of his character on the upswing.
The department has challenged him with tracking down the Nigerian drug
peddlers or else he faces the termination orders. In a lighter moment as
a mother loving son-his dialogue with his mother on the phone is indeed
the pride of the whole film, very simple scene very beautifully enacted &
picturised, bringing in the authenticity and the vulnerability of the character.

On the music front the track in the end titles come too late. Very catchy and
intense! Could have served as a catalyst if it were to be played in piecemeal
right throughout the film. Technically manageable!

You just can’t call it a film of comedy genre, on the contrary it’s the real life
situation which evokes certain humor & hence the comic relief one relishes
out of the tragedies of life.

So might as well watch it to relive it or leave it for others to watch it. 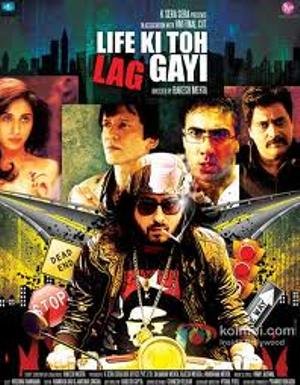