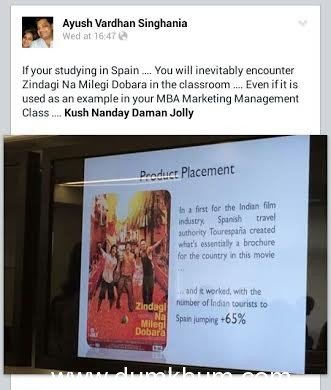 Excel Entertainment’s project, ZNMD received immense love and appreciation from audiences from all the quarters.

Zoya Akhtar’s film, with an ensemble cast showcased Spain so beautifully that ZNMD has now been included as a case study for a course in marketing management there.

The context reads how – The film played the role of a brochure of Spain which gave a boost to tourism in Spain post the release.

Zoya Akhtar directed ZNMD. She is known for her talent to make the backdrop of the film picturesque, making it a strong element of the film.

After the success of ZNMD the director is currently working on Excel Entertainment’s upcoming next film again with an ensemble cast, Dil Dhadakne Do. This time around the film is going to be majorly shot on a cruise liner.

Experts now predict that the cruise liner will become the next big trend destination for the people after the release of the film.

Dil Dhadakne Do again is a ensemble cast starring Farhan Akhtar, Priyanka Chopra, Ranveer Singh, Anil Kapoor, etc is one of the most awaited films of 2015.