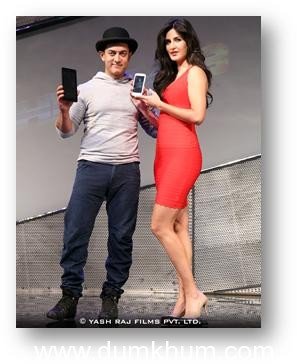 The D:3 licensing program, supported by Yash Raj Films Licensing (“YRFL”) comprises of a wide assortment of products ranging from Smart Phones and Tablets to Motorcycle accessories that feature unique designs inspired by the movie. The current D:3 licensed products include a broad array of licensed merchandise from a number of leading manufacturers and the list to grow ! ICE X Electronics: ICE and YRF Licensing have come together to create history in the domain of film merchandizing. ICE has created an innovative range of electronic gadgets inspired by the movie. D:3 is now the world’s first ever film to have its tablet and other branded electronics range. D:3 Ultra is a high end gaming tab, while D:3 Spectra is an entertainment tab targeted at the youth. Fans will get mesmerised as they experience DHOOM everywhere in their life with a host of accessories such as MiFi cloud routers, stylish power banks and multi-utility portable Bluetooth speakers.

Mattel: For the first time ever, YRF and Mattel have inked a unique partnership for the upcoming blockbuster DHOOM:3. Fans of the franchise are in for a treat with unique D:3 inspired limited-edition “Barbie Collector Dolls” of superstars Aamir Khan and Katrina Kaif, that capture their looks and styles from the movie! DHOOM buffs can take home a piece of the action with the first-ever Hot Wheels die-cast replica of SAHIR – The Clown Thief’s signature bike in DHOOM:3. Also available are a range of racetrack sets which bring the film’s stunts and action to life, in addition to  a special set of DHOOM:3 UNO cards for game lovers. Completing Mattel’s awesome line-up of D:3 products, is the first-ever Barbie Kids Apparel range inspired by this hugely anticipated sequel of the DHOOM franchise.

99 Games: The DHOOM:3 mobile game, capturing the action and intensity of the film and outstanding realistic graphics, puts the player in full control of his own D:3 super bike on the mean streets of Chicago. Players can also compete with their friends on the leader-board. Having already achieved over one million downloads, the DHOOM:3 mobile game has quickly become one of the most successful digital games produced in India. The D:3 mobile game launches on the Android, iOS and BB10 platforms today.

BollyXpress: Putting a bit of excitement into greeting cards, gift wrapping papers and calendars are these “first-of-a-kind” products, which feature D:3 music, vibration effects and fiber optic light technology, that will make the right impression for every occasion. D:3 greeting cards will also feature exclusive and special “Good Wishes” audio messages recorded by the stars from DHOOM:3.

Gulf Oil: A special consumer and trade promotion for Gulf Pride 4T Plus Bike Oils, supported by major retail displays, will feature a DHOOM contest and a chance to win exciting D:3 merchandise.

CEAT: Zoom ahead in style with superior grip DHOOM:3 Limited Edition CEAT TYRES. These tyres are H-rated, and carry a 210 km/hour speed rating.

Classic Stripes: For those who want to drive in DHOOM style, Classic Stripes is offering a line of hot D:3 bike decals that transforms any bike into a D:3 look-alike bike.

Nightingale: “Chic” is the word that defines this collection of a premium and varied range of D:3 diaries and notebooks that feature graphics based on the movie.

Bombay Dyeing: For those looking to spice up the bedroom and bath, is a Limited Edition of D:3 branded bed linens, cushions and bath linens.

Diva’ni: A perfect accent to anyone’s wardrobe are the colorful and trendy D:3  clown theme scarves.

Steelbird: The perfect combination of safety and style define the company’s line of D:3 inspired helmets for bikers.

Parksons: For those looking to spice up their game, try D:3 playing cards.

Vox Pop Clothing: D:3 inspired t-shirts for the youth looking to sport the style of DHOOM:3.

The above includes more than 200 varieties of products and 20 Partners with a combined penetration at more than 20,000 retail touch points and with a price range of Rs.69 to Rs.9000.

Also coming soon is the exciting YRF E-Store (yrfstore.com), offering fans around the world the opportunity to buy a wide selection of YRF’s film inspired merchandise!

THIS YEAR WILL END WITH A DHOOM!