A very sensitive theme is very positively presented in the movie YELLOW. YELLOW isn’t just a story about overcoming once personal challenges, but it is also a lesson for each one to be grateful and feel blessed for the many things we take for granted. After the grand success of ‘Balak Palak’, acclaimed actor Riteish Deshmukh and Uttung Hitendra Thakur once again back together to produce YELLOW. 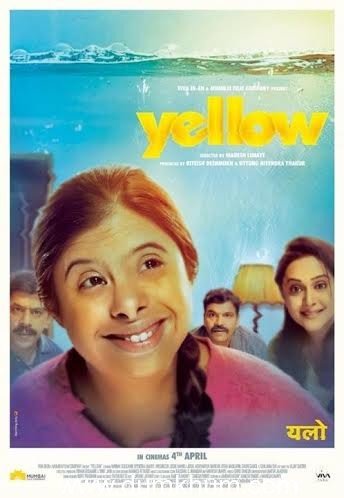 From scripting to completion of the movie, to release and after, the movie has always been in limelight and talk of the town. Hundreds of dignitaries & celebrities and lakhs of movie lovers followed the movie on social media.

“The success of the movie YELLOW is because of the efforts of the entire team. Gauri and Sanjana have brought great difference to our lives. I’m sure that each one will be inspired looking at them on screen. I’m content to offer a quality cinema for Marathi film industry”, said producer Uttung Hitendra Thakur.

“To receive the National Award for the first film is the biggest pleasure one can feel. The success is of the entire team. Everyone connected to the film has worked hard and has reached to every corner of Maharashtra successfully. I’m very proud of Gauri and Sanjana, they have really worked hard resulting in beautiful cinema. I’m happy that they are honoured with this award. Working with non professionals was a big task which was gratefully tackled by Upendra Limaye, Mrinal Kulkarni and Hrushikesh Joshi,” said the director of the movie Mahesh Limaye.

After noted bollywood films as cinematography, YELLOW is Mahesh Limaye’s first movie as a director. This is an honour to the director who was hidden in Mahesh Limaye since long. The writer of Balak-Palak Ganesh Pandit and Amber Hadap has written the story of YELLOW whereas the screenplay was by Ambar Hadap, Ganesh Pandit & Mahesh Limaye. One of the most loved actor Salman Khan was also inspired after watching the movie YELLOW and he has shown keen interest to remake the movie in hindi.

The most talked film continue to attract the bollywood and marathi film fraternity. The film is still in theaters attracting more movies buff every day. A must watch, Yellow makes a special place in your heart with its simple story about a girl’s determination to not let any shortcomings come in the way of achieving her dreams.