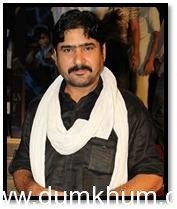 Notorious as Bollywood’s bad guy, Yashpal Sharma is back with yet another grey shade… He will be seen essaying the role of the villain in Viacom18 Motion Pictures’ Manjunath; the biopic based on the tale of a young IIM- Lucknow graduate Manjunath Shanmugham. Known to have played successful roles in Hazaaron Khwaishein Aisi, Lagaan, Gangaajal, and the more recent Gangs of Wasseypur, Yashpal’s experience made him bring the role of Golu alive with his instinctive talent. On receiving the script, Yashpal impressed Sandeep Varma with his understanding of the villain’s role. “He told me that the character needed some enhancement and together we rewrote Golu’s journey, envisioning the integrity of a villain’s character who is a central part of the film”, says Sandeep Varma, Director of Manjunath.

Yashpal plays a petrol pump owner, Golu who lives in Lakhimpur Kheri, Lucknow. He is a family man with great ambition, but is impatient about life. He thinks everyone and everything can be bought, until he meets Manjunath. He calls Manjunath his ‘friend’, but the IIM graduate refuses to support Golu when he makes the wrong choices.  According to him, everyone has a ‘price’, but he cannot comprehend what Manjunath wants him to pay. Yashpal has supported the Manjunath team with his valuable insights into making the villain’s role powerful and believable.

Manjunath is inspired by the true story of a boy in Lakhimpur, Uttar Pradesh who fought the fuel mafia and was brutally killed in 2005. The film is slated to be released on 9th May 2014.