WIFT held a workshop on Character and Costume With Neeta Lulla, Niharika Khan, and Gavin Miguel, 3 of the best costume designers of Bollywood moderated by Sarah-Jane Dias

WIFT India, Women in Film and Television India conducted an in-studio event with three top Bollywood costume designers, Neeta Lulla, Gavin Miguel, Niharika Bhasin Khan. The workshop, moderated by actress Sarah Jane Dias was based on the topic whether the character does define the costume and the role it plays in influencing stereotypes, mind-set about the much uproar about what “good” women “should” wear!

The evening was spectacular as it got together three iconic personalities from fashion industry Neeta Lulla, National film award for Balgandharva and Jodha Akbar, Niharika Khan, National award winner for Best Costume design in The Dirty picture, and Gavin Miguel, attributed to styling , Priyanka Chopra, Hrithik Roshan, Katrina Kaif, Shahrukh Khan and many other.

The event also displayed costume designs designed by Neeta Lulla, Gavin Miguel and Niharika Khan; one from period drama and one from current times that set the fashion trends; discussing the detailing that goes into making the sketches and finally how true the costumes to its character are. 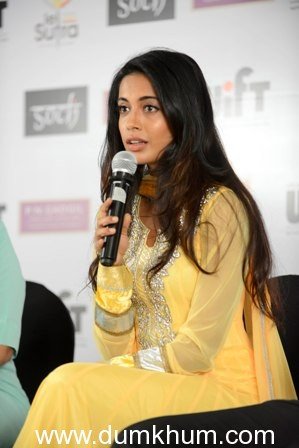 On this special occasion, Petrina D’Rozario, Founder President of Women in Film and Television Association India(WIFT), “These events are a way to open up doors for women to network with industry professionals and to form a support structure to help those who want to work in films and tv. ”

“Times have changed and so have the characters in Bollywood films. What hasn’t changed is the importance of jewellery for any character’s look. With this association, we wish to accentuate the importance of jewellery in a woman’s life, as has been portrayed by innumerable and memorable Bollywood characters through the 100 years of cinema our country has seen” Ashutosh Joshi, General manager, Sales and Corporate Strategy, P N Gadgil Jewellers. 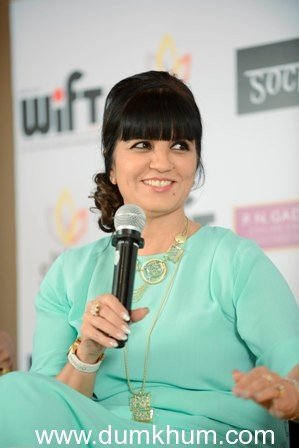 On this very occasion, Neeta Lulla said, “While making costume for a film it’s very important to understand the script the character the director’s mind and then walk on a thin line to create a costume which defines the character”.

The very ecstatic Niharika Khan said “In comparison, period movies are easy to work on as one has references of time and space you just have to put everything together but contemporary movies are difficult to work on as you are always expected to create something new”.