Why makers of Force 2 got letters from the family of Martyrs’! 3 families of martyrs have sent letters expressing appreciation to the makers of Force 2, for recognizing the sacrifice of their loved ones.
The recently released trailer to the sequel of the 2011 super hit Force has been garnering an overwhelming response from the audiences. The trailer of the espionage thriller, has taken the internet by storm and has struck a chord with the audience.
The makers of Force 2 have dedicated the movie’s trailer to all the heroes who have sacrificed their lives for the nation. Never before has a trailer been dedicated to the unsung heroes of our country. A special slide has been added to the trailer to salute the unrecognized martyrs. 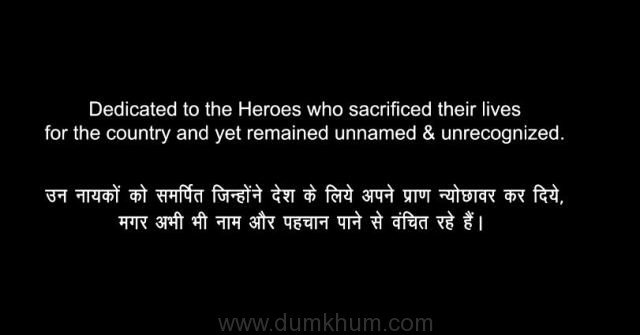 The slide at the beginning of the trailer reads, ‘Dedicated to the heroes who sacrificed their lives for the country and yet remained unnamed and unrecognized’. On the release of the trailer, 3 families of martyrs connected with the makers of Force 2 through various means of communications.
They have sent letters expressing appreciation to the makers of Force 2, for recognizing the sacrifice of their loved ones. Vipul Amrutlal Shah, the films producer, says, ” We weren’t expecting this kind of response. I’m happy that we are the first in saluting our unsung martyrs. My team and I were really touched by the letters. The families of soldiers and undercover agents have also thanked us for appreciating the loved ones they’ve lost. That means a lot to us.”
He further added,” There’s little that the kin of these heroes get. Our government is working towards the betterment of the intelligence officers and soldiers. May be we can bring the plight of the families of the deceased officers to their notice and help them. After seeing the response , we’ve expedited the process.”
The issue of martyrs not receiving recognition is a huge menace and an issue that is unattended to. We are largely fighting the issue of our hero’s not gaining recognition. Till date there are families fighting to win justice.
‘Force 2’ is an earnest effort at giving an ovation to the unrecognized martyrs of our country and the makers are honoured and touched with this gesture of the 3 families.
The team will visit Amar Jawan Jyoti in Delhi to voice their request and spread awareness, before taking the petition to the government. In Delhi, they will be launching a petition addressing the government of India, to recognize the uncelebrated martyrs of our country.
The Force 2 team is keen that, the names of these unsung hero’s should get recognized and even these heroes should be considered heroes of our nation. Later, they will also be taking this petition to the President.
Presented by Viacom18 Motion Pictures in association with Sunshine Pictures Pvt.Ltd. and JA Entertainment Pvt. Ltd, Force 2 produced by Vipul Amrutlal Shah and John Abraham, directed by Abhinay Deo, is all set to release on 18 November, 2016.