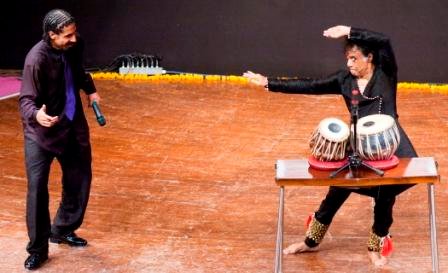 A meeting of cultures and fusion of art forms.  Chosen as the #1 Dance Performance by the San Francisco Chronicle.  Toured all over USA, Canada, Australia, and India.  Pandit Chitresh Das and Jason Samuels Smith present: “Fastest Feet in Rhythm.”And not only have they been recognized abroad, they have got commendable appreciation in India as well.

Prominent fashion designer based in Goa, Wendell Rodricks could not help but be thrilled by their performance in Goa, to which he said “I haven’t seen such fast feet since Ronaldo left, but meticulously enjoyed Pandit Chitresh das and Jason Samuels’s performance in Goa.”

‘Fastest Feet in Rhythm’ is an explosive collaboration between one of India’s foremost Kathak masters and one of the world’s fastest, Emmy-award winning tap dancer. It is high entertainment which crosses all boundaries of age, race and culture — a blast of incredible speed and power, grace and beauty, epic storytelling and the pure joy of dance.