The winner of Kashish 2012 Poster Contest has been chosen! The KASHISH Poster designed by S Ayyappa, a young graphic design student from Vijayawada has been picked as the winner by Wendell Rodricks, one of India’s top fashion designers.

Announcing the winner, Wendell Rodricks said, “The winning poster has raced ahead of the rest due to the creative nature of translating the butterfly motif without resorting to the butterfly icon that is part of the Festival motif. That apart, the message is conveyed with clarity, minimalism and dignity – three characteristics I personally cherish, and wish to congratulate the winner for the same.”

The contest to design the official poster for the upcoming 3rd KASHISH Mumbai International Queer Film Festival saw a huge number of entries from professional and amateur designers as well as students across India.

S Ayyappa, the young student pursuing his MSc Visual Communication (graphic design) at Andhra Loyala College, Vijayawada, was ecstatic. “I am very happy that my poster won the competition conducted by Kashish. This is the first national competition that I have participated in and it feels great to enjoy the taste of success. This award will help me to move forward on my way to successful career in design with confidence and support. I really thank Kashish for giving me this opportunity and my friend Sampath who encouraged me to participate in the competition.” 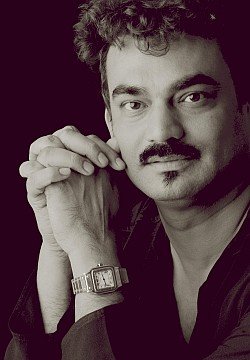 Speaking of his design he said, “Like the colorful butterfly which travels around, your film festival also reaches many people”

The winner of the poster contest will receive a KASHISH trophy and a gift hamper. The winning design will also be featured on hoardings, print and online advertisements, catalogue covers, banners, cinema slides and delegate cards.

“The theme for this year’s festival is ‘For Everyone’, which means it has something to offer for everyone – not just for the LGBT community, but also their families, colleagues and friends. The poster contest, which saw entries pouring in from across India, reflected this spirit” said Mr.Rangayan, adding, “The contest has achieved what it set out to – not just focus on the metros but also reach out to queer persons in tier 2 and tier 3 cities across India. The winner being from Vijayawada just underscores the reach KASHISH has had in the last two years”.

Mr.Patankar agreed to say, “Involving a larger community beyond the LGBT boundaries  and encouraging creative expression of one’s sexuality is what KASHISH has always endeavoured, I am happy that a student has understood this underlying message and has participated in this contest, keeping with this year’s theme of KASHISH 2012 – For Everyone”.

KASHISH 2012, the third edition of the India’s first and only mainstream queer film festival, will be held between May 23-27, 2012 in Mumbai at Cinemax Versova and Alliance Française de Bombay.