Founded by Arunabh Kumar, Creative Experiment Officer (CEO) and one of India’s most successful new-age media entrepreneurs, TVF (The Viral Fever) is the first company in the country that focused on youth entertainment to create progressive and new-age content – pioneering web series, a new genre of online entertainment. 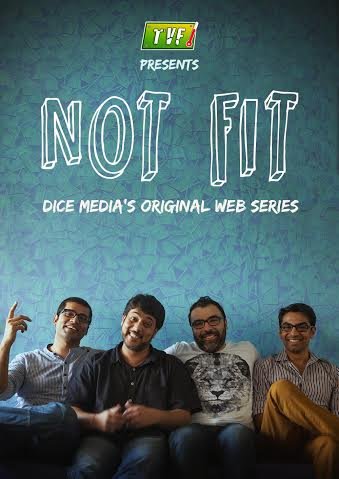 This Wednesday, December 16th, TVF will launch the first episode of the first of its kind original series – a mockumentary comedy – Not Fit – created by premium digital video creators, Dice Media on their online destination, TVFPlay.com. The launch of ‘Not Fit’ follows hot on the heels of the hugely popular web series, Pitchers, which smashed all records earlier this year by amassing an unprecedented viewership of over 7 million in its Season 1 with 5 Episodes! Pitchers is also currently ranked at 21 in Amazon’s IMDB’s* List of Top 250 TV Shows with a Meta Score of 9.7/10, becoming the only Indian entry to do so!

Always on the lookout for ways to keep its fans engaged and entertained, TVF has partnered with Dice Media, who recently produced the tremendously successful video, ‘Ban Ban’, which had an organic viewership of over 3 million!

The two companies are excited to launch the first of its kind, original mockumentary web series, Not Fit,which is a tongue-in-cheek look at the world of aspiring actors and the weird and wonderful environment they inhabit.The series is written and directed by the multi-talented Sudev Nair, an FTII graduate and recipient of the Kerala State Film Award for Best Actor, who also plays the lead role of a struggling actor, named ‘NERO’!

Having pioneered the web series genre in India and having created two very successful web series Permanent Roommates and Pitchers, Arunabh Kumar, CEO and Founder of TVF says, “The fabulous team of Dice Media led by Ashwin Suresh and Anirudh Pandita along with Sudev Nair have been able to create an original s​eries that is akin to our TVF mantra and we are happy to have them as our partners.”

​Ashwin Suresh, Co-Founder of Dice Media says, “We are extremely proud to have created ‘Not Fit’, soon after the tremendous success of our previous videos, ‘Ban Ban’, and ‘NetaSabkiLeta’. We are working hard to bring more engaging and entertaining content to young Indian audiences and look forward to collaborating with Arunabh and his team.”

Anirudh Pandita, Co-Founder of Dice Media adds, “We’re happy to partner with TVF on this series. We believe the company has the right audience for this show and this partnership allows us to showcase our content to them. The two brands have a common mission, which makes us natural partners as we push the envelope when it comes to content formats in India.”

TVF is the First Online Network to get A+ grade Bollywood celebrities from SRK and Anurag Kashyap to Ayushmann Khurana for their content.

​In less than 3 years, TVF has created over 12 of the country’s popular online content properties – TVF Originals – from Qtiyapa that has a subscriber base of over a million to the hugely popular, Barely Speaking with Arnub, the world record breaking branded web series, Permanent Roommates, Chai Sutta Chronicles, The Making Of Theatrical Trollers, and more recently in 2015 with TVF–Pitchers.

In 2013, TVF was the only Indian YouTube Network to represent India at the first ever International YouTube Fan Fest. Arunabh was also the only representative from South Asia to be invited to the 2015 Global Creators’ Summit in New York. TVF was also presented the inaugural Award for BEST Brand & Creator Collaboration in India in 2015.

More recently, Arunabh, who is an IIT Graduate, was featured in Fortune’s “40 under 40” List of India’s top Business Leaders of 2015 along with “GQ’s Most Influential Young Indian” and has been instrumental in redefining entertainment for the youth as well as driving the online content revolution in India over the last 3 years.

Dice Media is the premium digital video division of Pocket Aces. Dice is an initiative to create memorable digital video properties for the Indian millennial.

Pocket Aces, a digital entertainment company, was founded in 2013 by Ashwin Suresh and Anirudh Pandita, former investment bankers and private equity professionals from the US, UK & UAE, who moved to India to in order to create the media company of the future and provide young Indian audiences with engaging and entertaining content across various formats and platforms. Both founders received engineering degrees from the University of Illinois at Urbana-Champaign. Anirudh also got his MBA from the Wharton School of the University of Pennsylvania.