‘Wazir’ in theatres with Bajirao Mastani and Dilwale. Vidhu Vinod Chopra’s Wazir has made an appearance in theatres alongside festive releases like Bajirao Mastani and Dilwale. The Amitabh Bachchan-Farhan Akhtar starrer ‘Wazir’ has installed headrests bearing the films logo on Multiplex seats. The seats consist of the film’s name along with a caricature of Wazir’s chessman.

As a part of a unique marketing initiative, Wazir is to provide cine-goers a chess board like feel as the headrest of every seat in theatres are in alternates of black and white. The unconventional marketing idea was conceived and executed on Producer Vidhu Vinod Chopra’s behest. When contacted Vidhu Vinod Chopra, he shares, “I wanted to connect directly to my first day, first show viewers and tell them to begin their new year on a high. And I thought that this was the best way to reach out to them.” This is the first time that a film’s content has literally entered a cinema hall much prior to its release in exception to theatrical trailers. The presence of Wazir is to have an impact as the audiences of the festive releases visit theatres.

Wazir is an action drama which revolves around the concept of an unsual friendship shared between Amitabh Bachchan and Farhan Akhtar. The film will also mark to be Farhan’s first action film as the actor dons the character of an ATS Officer. 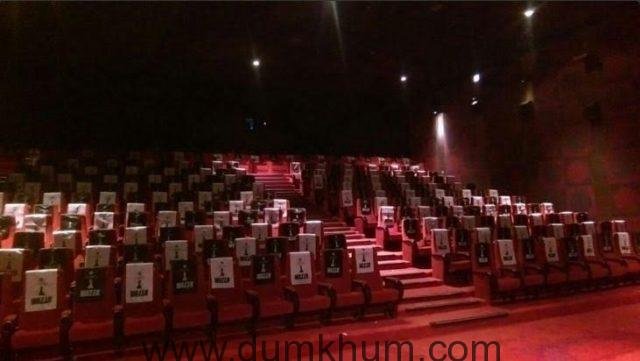 Produced by Vidhu Vinod Chopra and Directed by Bejoy Nambiar, Wazir is set to release on the silver screen on January 8th, 2016.