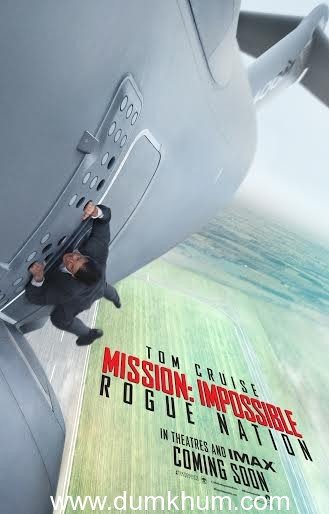 As norm has it, one usually travels in an airplane and not on it! But the brave always take the path that’s less trodden and it’s exactly what Hollywood’s well-known actor Tom Cruise did. In the recently released high octane teaser, for his upcoming action packed film Mission: Impossible Rogue Nation, the actor is seen hanging for his life out of a high speed jet giving a sneak-peek into the risky like of an undercover agent. A poster showcasing him in a silver suit clinging onto his life while out of a flying plane has also been released.

‘Mission: Impossible Rogue Nation’, is the fifth installment of the very popular series of the same name chronicling the life of a secret agent. Reprising his iconic role of Ethan Hunt, Tom Cruise not only shows off his chiseled body but also his super fast reflexes. Swedish actress Rebecca Ferguson plays fellow agent who thrashing her nemesis in dress!  After a gripping teaser, the trailer of this much-awaited film will release tomorrow at noon.

Fans have been eager to see their favorite star on screen looking ravishing as he unearths the syndicate in ‘Mission: Impossible Rogue Nation’.