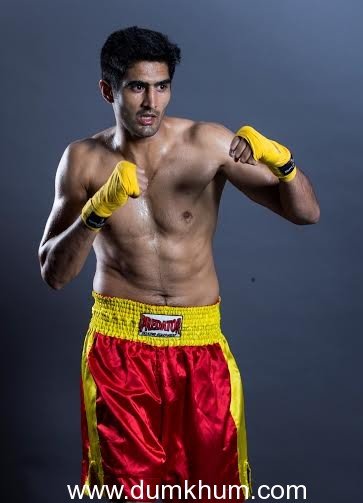 MANCHESTER, Indian boxing sensation Vijender Singh met face-to-face with his opponent Sonny Whiting today and both are promising an explosive fight this Saturday at the Manchester Arena.

Singh, the 2008 Olympic Bronze Medalist, makes his long-awaited glittering professional debut against the experienced Whiting over four rounds in the middleweight division, as he begins his quest to become India’s first every professional boxing world champion.

At the final head-to-head press conference today, alongside the main event world title fights on the card: Terry Flanagan and Diego Magdaleno and Liam Smith and John Thompson, Singh and Whiting both gave their opinions ahead of the big fight.

Vijender Singh said, “I’m ready for Saturday and whatever Whiting brings to the ring.  I’ve trained hard for my professional debut and nothing or no one is going to get in the way of what I have to do, especially Whiting.  I’ve been preparing hard with my trainer Lee Beard in Manchester and we have done everything we can in preparation for this so now it is down to me to deliver the goods on the night in the ring.  I’ve seen Whiting face-to-face now and we will see on the night what he can do in the ring.  Physically he looks strong, but looks are deceiving, there are plenty of question on him as well: Can he take my power? Will he be able to cope with my speed and footwork?  With only a few days to go he is the only thing on my mind right now. Beating him, winning, and getting my first professional win on my record.

Sonny Whiting said, “There’s so much hype around this fight anyone would think that it’s the main event!  I’m going to put this kid through absolute hell in the ring on the night.  Since it was announced that I would be the opponent for Singh I’ve been cast off as someone who’s in there to get a pasting from him.  Listen, I’m not taking a pasting for nobody, especially from someone who’s making his pro debut.  I’m a proud fighter who will go in there and give it everything I’ve got and I’m not laying down in front of anyone.  He’s making his debut and I’ll give him a hard welcome to the professional game.  What he’s done as an amateur doesn’t count, he’s now with the big boys in the pros.  He might of been a superstar in the amateurs around the world, but now he’s going to feel the pain in the pros.  Once I start roughing him up and landing the heavy punches, what’s he going to do? Look for the referee to help him out?  If he’s goes past the second round I’ll be surprised.  I’m looking to do some damage and take him out early.  He won’t be able to stand my body shots and I’ll break him in half with them.  This is going to be a Whiting victory.”

The broadcast rights for Vijender’s professional debut are acquired by Sony Six and the live telecast in India will start at 10:10 pm IST.