Shot in the picturesque foothills of Leh, Grazing Goat Pictures introduced their third track from the upcoming film Fugly, titled Banjarey. The song which talks about friendship and travelling is being greatly appreciated by music lovers internationally. 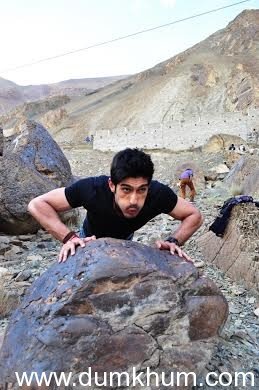 On the sets of Banjarey, since there were no gyms in Leh, the boys Mohit and Vijender used the rocks lying around for free weight training while shooting for the song.

Banjarey has been composed by music sensation Yo Yo Honey Singh and is unlike any of his previous compositions. This is the third song to go viral after ‘Yeh Fugly Fugly Kya Hai’ which created a huge stir with its signature ‘Spider Step’. The song became the most popular video on YouTube India within 4 days of its release.