Vidya Balan wins the Iconic Woman of the Decade award! 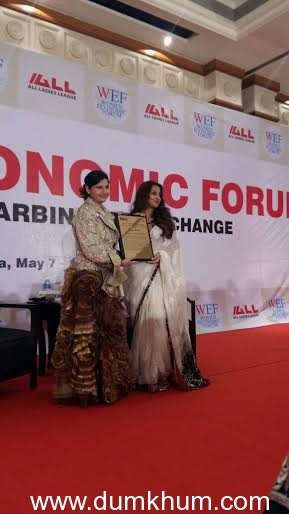 Having won multiple awards for her nuanced performances, including the highly coveted National award for her role in The Dirty Picture, powerhouse performer Vidya Balan was yesterday conferred with the “Iconic Woman of the Decade” award for Excellence in Empowering Women-oriented Cinema.

Vidya was bestowed the award at the Women Economic Forum for her role in reviving the feminine regard in Indian cinema and for her brilliant portrayal of some magnificent woman characters.

The Women Economic Forum,is an initiative of the international women’s chamber, ALL Ladies League (ALL).The forum is a unique event where women leaders and entrepreneurs from ALL over the world come together every year. The powerful global happening, saw over 400 people attend , including 100 women delegates from 25 countries, and speakers from different parts of the world, making it a truly international event.  Apart from receiving the award, Vidya Balan, also addressed the gathering on the subject of “Women in Indian Cinema”.

Says Dr. Harbeen Arora ,Global Chairperson,Women Economic Forum ,”For her brilliant performance and portrayal of some magnificent women characters in the Indian cinema , ALL ladies league confer Vidya Balan the award of the iconic women of the decade for excellence in empowering women-oriented cinema”.