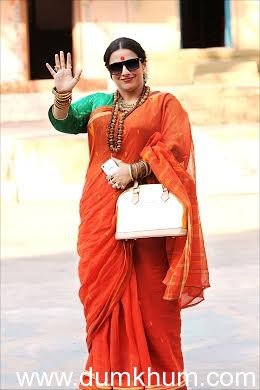 Vidya will be getting into many disguises while she essays the role of a detective in the film.
As one of her disguises she in her upcoming film Bobby Jasoos, Vidya will seen as a big TV producer who everyone wants to work with. Her look and character nuances are ditto like Shobha Kapoor. Even her charcter name is Makhila Kapoor
Vidya is very close to both Ekta and Shobha Kapoor having worked with them in Dirty picture. However, she will be seen getting into the shoes of Shobha Kapoor in one of her disguises

Vidya tried 122 disguises before she locked the 10- 12 disguises which she will be essaying in the film.

She is seen as a beggar,  as an astrologer, a peon, a college student to name a few.

The disguises are nuanced looks which the team has put together very carefully.

They took more than 15 days to shortlist the looks and they even documented the entire process. However sourcing the looks and sketching the character nuances started much before. There was an entire team dedicated who were identifying and putting together the look.

The entire team was involved in the process as it was key to figure this bit out before the film went on floors.Once the look was shortlisted they underwent workshops for the mannerism and personality traits she would have to imbibe in the film