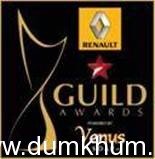 Mumbai, The Renault Star Guild Awards 2013 powered by Venus Soaps was a glittering, star-shimmering event held at Mumbai’s Yashraj Studios. The Film & Television Producers Guild of India and Wizcraft International Entertainment announced the winners in Film & Television for the year 2013. The red carpet was rolled out as stars and celebrities walked down to celebrate the best of 2012 in Hindi Cinema & Television. Stars sashayed stardom, dressed in their classiest, gorgeous best as they walked down the Red Carpet. The beautiful Vidya Balan for the second time in a row won the Best Actress Award for her performance in Kahaani while Ranbir Kapoor won Best Actor Male for Barfi. New-age films, Vicky Donor and Barfi tied with 7 awards each, sweeping major awards in the popular and technical category with the latter winning Best Movie as well.

Taking the podium as host for the first time, superstar Salman Khan was the highlight of the night. Salman brought his signature style, camaraderie and flair on stage and won the hearts of the audience and contemporaries. Sonakshi Sinha who hosted a section of the evening with Salman complimented his wit and humour.

The evening was coupled with enthralling performances by the super-stars themselves. Ayushmann Khurrana and Kunaal Roy Kapur performed on ‘Dramebaaz’ and ‘Sadi Gali’ while promoting their film, Nautanki Saala. Jacqueline Fernandez gave a spell-binding performance to ‘Party on my mind’ and ‘Lat lag gayi’. Stars of Mere Dad Ki Maruti, Rhea Chakraborty and Saqib Saleem also performed on songs ‘Punjabiyan di Battery’ from the film. Other performances came from Anushka Sharma, Abhishek Bachchan and Arjun Kapoor. Mr. Sumit Sawhney, Executive Director, Renault India Pvt Ltd said “As a brand that has been at the forefront of automobile technology for the past century, Renault India takes immense pleasure in its association with the Star Guild Awards. Both the Guild and Renault lay special emphasis on driving the change. Renault is proud to work together with the Guild in its centenary year to highlight the achievements of these distinct personalities driven by a commitment to passion and excellence, Renault and the Guild Awards are therefore a perfect fit and we look forward to a long and meaningful association.”

Nachiket Pantavaidya, General Manager – STAR Plus said, “STAR Plus is proud to be associated with the Renault Star Guild Awards. Being the only awards that have the producers giving their final verdict brings an esteemed credibility to the property. We are delighted to bring to our viewers an entertaining evening with some of the best performances by Bollywood superstars.”

Sabbas Joseph, Director, Wizcraft Entertainment International Ltd. said, “The awards night had an extravagant old-world baroque set coupled with lasers and special effects, creating a magical visual impact while envelopes were opened and the deserving stars were awarded for the best work of 2012. The Renault Star Guild Awards 2013 was an absolute success.”

The awards are presented by Renault and powered by Venus Soaps. Star Plus is the official Broadcast partners and Associate Sponsors – HTC, Nivea Whitening Deodorant, Videocon and Life Insurance Corporation of India. Watch out for magic of the Renault Star Guild Awards 2013 will be telecast exclusively on Star Plus.