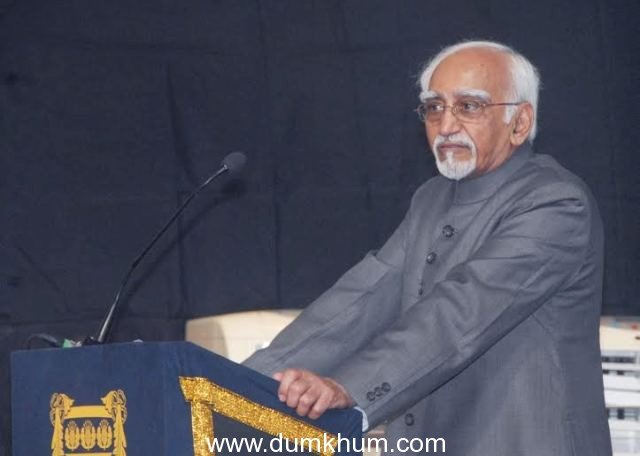 Vice President Shri Mohammed Hamid Ansari today held an interaction with the students of Wilson College, Mumbai, before departing for Bhuj, as part of his two-state visit.  Shri Ansari answered a wide range of questions from the student community covering domestic, national and international affairs. On this occasion Vice President also released a set 5 DVDs containing collected works of eminent educationist Scotsman Rev. John Wilson, the founder of the college in the year 1832. Incidentally, Wilson College predates University of Mumbai, to which it is affiliated, by a quarter century. On upholding the spirit of the Constitution

I think the task which each one of us as a citizen has to undertake is to remain true and faithful to the letter and spirit of the Constitution.  The spirit of the Constitution is explained in 4 words – justice, equality, fairness, fraternity.  In a country that is so vast and so diverse, where 4,600 different communities dwell, challenge of accommodation is an hourly challenge.  People who walk on the road should be governed by the rules of the road and not by the height, or caste or colour of their skin.

Our constitution was drafted six decades back. When it was written, a great political scientist in Britain  Ernest Barker, in his last book of 200 odd pages, put the preamble of our constitution on the front page and said, my book only expands the idea which are mentioned in this one page.

Unity in diversity – homogeneity is a limiting notion, diversity is a fact of life.

I have spoken frequently enough on this subject.  Can you find a country which is homogenous. People says China is almost homogeneous.  But almost homogenous means 90%, and the remainder 10% is giving them a fair degree of trouble, because they have not developed a framework to accommodate the 10%.

Homogeneity is of fictional notion or a limiting notion. Diversity is a fact of life. Accommodation of diversity is the challenge.  Indian polity and Indian society has been addressing this issue not for the past 60 years but for centuries.  This diversity has been with us since time immemorial.  That is the only response that is possible, any other path will only see obstacles.

The point is what do we understand by the word ‘secular’.  There are philosophical, theoretical and practical arguments about it.  Philosophical argument is rooted in the Western thought.  The ground reality is that we have a society in which people of different faith live side by side.  The challenge is the need to accommodate.   In terms of statecraft, secularism means, state shall not have any religion of it own,  and it shall not discriminate on the basis of religion.  When it comes to dispensation by the state, the state should judge on objective criteria and not on the basis of religion, caste or creed.

On dealing with prejudices

Openness of mind is the best way to deal with prejudices. It is very easy to attempt to define prejudice but very difficult to actually define. Preference is one thing, prejudice is one.  Once you have an open mind, a fair mind, a tolerant mind then prejudices tend to recede into the background.  Prejudice is part of the make up of a human mind.  What we can do, is to try to bring it within reasonable  limits and be tolerant to views that are different from ours.

Discrimination on the basis of sex is forbidden by law. But, our society suffers from various ailments and one of them is discrimination against women.  The challenge today is social so it has to be addressed socially and not necessarily legally.  Laws have been enacted, yet they are not producing desired results because of social resistance.  We have to overcome it.  Education has made a key difference. Term empowerment of women does not mean empowerment only at work place. It has to be at home too.  The issue therefore has to be addressed at the community level and the family level.

On work Culture – quest for excellence should be the motto.

When it comes to work culture we all cite world like examples like  – Japanese work culture,  German work culture so on and so forth.  But look at our own examples.  Be it the Meenakshi temple at Madurai  or the Taj Mahal in Agra; do you think those  people who built great edifices in India didn’t have the work culture?  Simply explained, their work culture was the ‘quest for excellence’.

Afghanistan has been in turmoil for nearly 50 years. There are two responses to the issues in Afghanistan. One is to profess to help Afghans the other is to use that  to interfere in their affairs.  What is needed is you curb the second impulse and focus on the first.  Any attempt to impose a way of life in Afghanistan or how the Afghan state should be run is not going to work.  Afghanistan’s affairs should be left to the people of Afghanistan.

There are two stands –one is the legal stand and another is the political stand. We tend to give more importance to the political stand than the legal stand.  The argument of Iran is that they are signatories to an international treaty under which they have certain rights and they should be judged on the basis fulfilment of obligations prescribed.  But the political stand traces its origin to the Iranian Revolution of 1979 after which Iran transformed itself from being an  ally of the western world to being perceived enemy of the western world. The Political stand is subject to political calculus. It changes and it may change again. Intensive negotiations are in progress.  As far as legal rights are concerned, they must be determined only by the treaty to which Iran is part of .

My book ‘Travelling Through Conflict’ was written when the West Asia was in turmoil.  Some of those conflicts have not ended, but worsened.  There are two kinds of impulses which are causing this turmoil.  One is the social structure of these societies. Most of them have autocratic set up and equality has been an issue.  The second is the impulse to interfere. There natural resources have at times become a  curse for these countries.