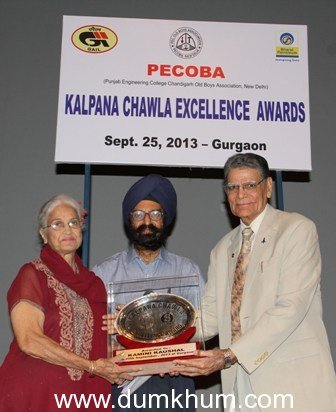 According to Amarjit Singh Kohli, Founder Gen Secy, PECOBA others who received the Award were Arjun Awardee and former Asian women chess champion Tania Sachdev of Delhi who has won 21 International Medals in Chess representing India; innovative educationist Minoti Bahri who is Director of Shikshantar School, Gurgaon and creative young kathak dancer Vidha Lal of Delhi who holds the Guiness World Record for most number of Kathak spins (103) in one minute. Eighty six years old Kamini Kaushal has acted in films continuously for the last 67 years starting as the heroine of Chetan Anand’s film Neecha Nagar (1946), her latest film being Chennai Express (2013) in which she played role of Shahrukh Khan’s grandmother. She has acted in about 100 films till date and continues to be active.

Speaking on the occasion Mr Amarjit Singh Kohli, General Secretary of PECOBA & Chairman Sakha said that immediately after Kalpana’s death, PECOBA had organised an Homage Assembly on 9th Feb, 2003 in New Delhi in which the following message was received from Mrs Sonia Gandhi, the then leader of the Opposition in Lok Sabha

“Today we pay homage to a remarkable young Indian who shone like a star throughout her brief life, illuminating our lives, and bringing pride and glory to India. … She was that rare person whose dedication, determination and quest for excellence matched her souring aspirations. Her brilliant career as an astronaut was achieved entirely through her own efforts – she pulled no strings, sought no favours, and she was willing to sacrifice her life to push forward the frontiers of human knowledge…. Kalpana’s life will continue to inspire generations of young Indians.

Mr Amarjit Kohli stated that now 10 years have lapsed since the death of Kalpana Chawla. The Government should acknowledge her contribution by bestowing Bharat Ratna on her posthumously, more so when it has already conferred Padma Bhushan on astronaut Sunita Williams who came much later.