Varun Dhawan’s fan Comes down to India from Ukraine 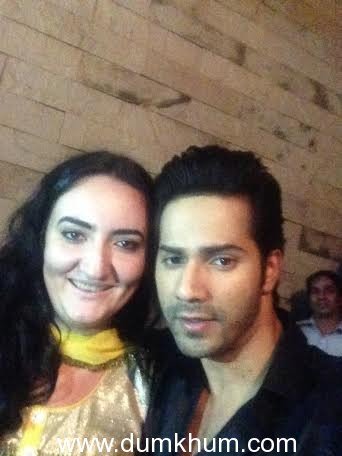 Recently Varun’s  fan from Ukraine came down to India just to meet him.The girls name was Nastya.  Varun was shooting for a brand when he first met her. As the girl from Ukraine could not speak or understand  Hindi or English there were some people with Nastya who would tell Varun what she was saying. All she could say was I love you a couple of times which embarrassed him to some extent. An insider says that it was a thrilling experience.

Varun was so surprised to see that she had all pictures of him from promotions,advertisements,film material. A source says when he saw this he could not express in words inhe invited her for the trailer launch of main tere hero.

Varun says , “Yes, I had invited Nastya for the trailer launch. She came for the event and I made sure that she was comfortable. She really liked the trailer. In fact, she had brought some chocolates and a local dress — striped shirt and pants — for me. You certainly feel good when your work reaches beyond boundaries in such a loving way.”