UTV Stars’ ‘Walk Of The Stars’ Felicitates The Versatile And Evergreen Actor: Jeetendra! 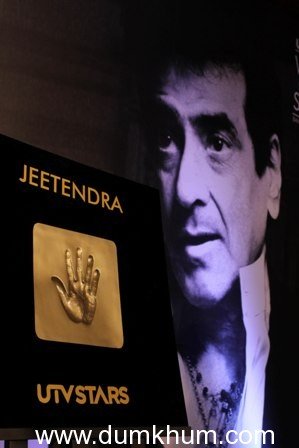 UTV Stars along with veteran actor, Jeetendra unveiled his hand impression tile, to be installed at Walk of the Stars at Bandra Promenade UTV Stars’ Walk of the Stars unveiled the celebrated actor, Jeetendra’s hand impression tile on Wednesday, 18th December, 2013 to honour him for his priceless contribution to the Indian film industry. The tile which was unveiled by the actor himself, in presence of family and close friends, will later be installed at UTV Stars’ premium property, WALK OF THE STARS, at the Bandra Bandstand Promenade. Walk of the Stars has honoured several silver-screen personalities from the Indian film industry since inception and will continue to do so. In order to commemorate the legendary actor Jeetendra, his tile will soon be joining this illustrious list. This award winning actor who has given super-hits like Mawaali, Himmatwala, Caravan, Geet Gaaya Pattharonne and many more has also shown his versatility by producing films and television shows. “I am glad to be honoured, to join the league of silver-screen greats. UTV Stars is doing an incredible job by paying an ode to all the talented individuals who have immensely contributed to the Indian film industry. I am happy, that UTV Stars has taken this initiative, which will mark the remembrance of all the senior actors in this industry.  And it gives me unbound happiness to be a part of UTV Stars’ Walk of the Stars alongside such celebrated personalities.” Said, Jeetendra, after unveiling the tile dedicated to him by UTV Stars Walk of the Stars. “UTV Stars has always tried to bring Bollywood closer to its fans and with the launch of Jeetendra’s hand impression tile for Walk of the Stars, we have made an attempt to bring his admirers closer to the legend. In order to pay an ode to this evergreen actor’s precious contribution to the Indian film industry and his unmatchable personality, this will be a symbol of appreciation and respect from our side. It’s an honour and gives us great pleasure to have Jeetendraji’s tile as a part of UTV Stars’ Walk of the Stars,” said, Bikram Duggal, Director Marketing, Media Networks, Disney UTV Media Networks. The iconic superstar’s hand impression tile will join those of the other legendary names at Bollywood’s official landmark, Walk of the Stars at the Bandra – Bandstand Promenade, the most recent of which was Asha Parekh. Walk of the Stars saw the launch of Rajesh Khanna’s statue earlier this year and witnessed Yash Chopra and Dev Anand’s statues the year before.