His first album in almost 10 years, `Future Shock’ features 13original songs, all with an International appeal 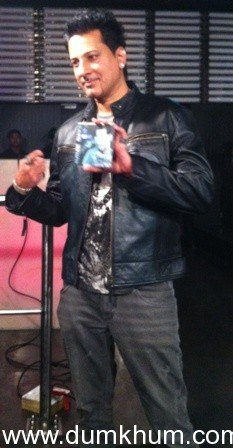 ‘Future Shock’ is Bally’s first studio album in almost 10 years.During this time he has worked on over 70 songs from which he has created the album. It has been recorded in Mumbai, Chandigarh, Africa and England and reflects his ethnic roots paired with his unique down-tempo and ambient elements.

‘Future Shock’ is an eclectic collection of various ‘Sagoo swings and moods’ that he went through whilst making this album. The laid back songs reflect his mature, calm personawhile the more energetic songs highlight the mood of parties and clubs where the creative seeds for this work were sown. There’s something for everyone on this tightly produced album.

Says Bally Sagoo on his new album, “To the listeners and followers of my work, who have patiently waited for ‘soooooo’ long, I hope I made them proud. This is an album I worked really hard on over the years, curating some great new voices and putting the right beats together. It’s got something for everyone in it. And I’m glad to put it out on Universal Music India who share the same passion with me and will go the whole hog to do justice to it.” Speaking on the newalbum, Sunil D’Sa, Vice President – Marketing, Universal Music India said, “We are extremely delighted to release the brand new album ‘Future Shock’ from Bally Sagoo. This was a long time in the making but the end product is simply brilliantand well worth the wait. On the album Bally takes you on a whirlwind ride, introducing some spectacular new voices and new sounds which showcase his prowess over great ‘sound’ production. Though being around for almost 2 decades, Bally has re-invented and adapted himself to today’s contemporary music proving he is still the ‘king of the beats’!”

Brought up in Birmingham – UK, Bally developed an affinity toward reggae, soul and disco which inspired him to create mix-tapes and freelance as a DJ at local event. He started his career with a local record label that approached him to remix a track titled ‘Hey Jamalo’. The track gained great popularity elevating Bally’s reputation in the industry and leading to the release of his first album `Wham Bam’. The success of his first album created massive hype among music circles and there’s been no looking back ever since.

Bally’s second album `Bollywood Flashback’ also did very well and he became the first Indian artist to be play listed on national mainstream radio. His Indo-influenced Dance and Hip-Hop fusions were largely popular with young audiences particularly his album ‘Rising from the East in 1996’ which included the hits “Dil Cheez” and “Tum Bin Jaye”.

‘Future Shock’ is available in India across physical and digital formats Exclusively on Universal Music.