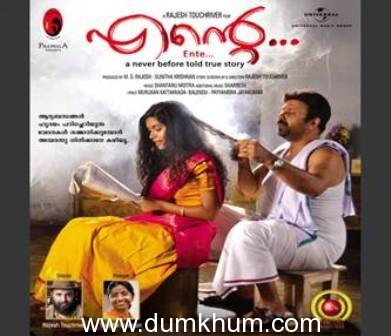 Moitra has composed the background score and the heart-wrenching title number” PavaNjan… Kalippavanjan…” rendered by ShreyaGhoshal. Noted Malayalam music director Sharethhas set the music for the other songs in the movie that have been sung by Ranjini Jose and newcomer Jeevan. The lyrics are by Payyambra Jayakumar, MurugaKattakada and Balendu.

Ente,is a unique family thriller that puts the spotlight on a pressing social issue

Directed by Rajesh Touchriver, Ente is the first mainstream movie from acclaimed social activist Dr Sunitha Krishnan. It is based on a true story that talks about the flesh trade and betrayal of trust unfolding through the relationship of a father and his daughter