Gitanjali Group furthers the cause of Beti with Pinkathon

In an overwhelming response to the cause, more than 2000 women from different walks of life came together living up to Mumbai’s famed spirit and supported the cause with full vigor. Kiran Tiwari emerged as the proud overall winner of the 10k run while Mayuri Sutar and Nikita Ingale won the 5 km and 3 km class respectively of the multi-category running event.

Proceeds raised through Pinkathon International Women’s 10k will be used by the Women’s Cancer Initiative, led by Deveika Bhojwani, in their fight against breast cancer. This is the first of the planned 10-city tour across India, as the event organizers plan to take it in different cities over the next couple of years. Thereon, Pinkathon will continue being an annual event in every city it features in. Apart from these, 650 members from Brahma Kumaris – World Spiritual University, 50 police women from the Mumbai Police and several corporate bigwigs led by the Pinkathon Mascot and Red FM RJ Malishka participated in the run. Reema Sanghavi, Managing Director, Maximus Events said, “The response to the very first edition of Pinkathon International Women’s 10K has been tremendous. Each participant Running for Pinkathon and Running to Lead is a winner in all ways. It is encouraging to see that more than 2000 of us women came together to run as one, and I think this will go a long way in creating awareness about breast cancer.” Avid runner, fitness enthusiast and the Managing Director of Maximus Events – Milind Soman said “We are immensely proud to have garnered such widespread support from different quarters and thank each participant for play an important part. We trust that this will help women realize that they need to be constantly aware and spread the word around. I would also like to personally thank all my friends from the film fraternity including Karisma Kapoor, Bipasha Basu, Soha Ali Khan, Dia Mirza, Shahana Goswami, Kunal Kapoor and Rahul Bose; without whom the event wouldn’t have tasted such success.” Mr. Mehul Choksi, Chairman & Managing Director, Gitanjali Group said, “Gitanjali Group takes the cause of Beti further by supporting Pinkathon. Our jewellery adorns women everyday and enhances their beauty, but we also appreciate the very important role that they play in society. The breast cancer awareness initiative undertaken today will educate people about the causes and prevention of this hugely under-publicized ailment.” 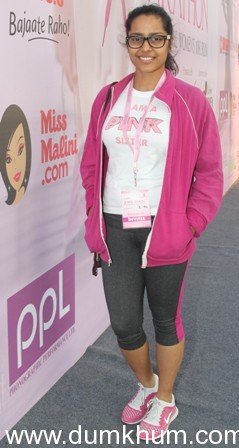 According to medical research, running is an activity that not only promotes well being but also raises immunity levels and improves health to help fight diseases like cancer. Running therefore addresses most of the top 10 ways to help prevent breast cancer. In India, the number of new breast cancer cases is about 115,000 per year and this is expected to rise to 250,000 new cases per year by 2015. It is also one of the curable cancers if detected early.

Listed below are a few highlights of the run, along with quotes from honorable Chief Minister of Maharashtra – Shri Prithviraj Chavan and Bipasha Basu – who weren’t present at the event but sent in their best wishes to Milind Soman via msg / mail.

I am happy to know that the first ever Pinkathon, India, a marathon event for women is organized in Mumbai on 16th December, 2012. I am sure this event will help increase awareness about breast cancer & precautions to be taken by women. I appreciate your initiative in this regard & extend my best wishes to you & all the participants on this event.” – Honorable Chief Minister of Maharashtra – Shri Prithviraj Chavan

“Cancer is a word, not a sentence. Don’t let this disease define who you are as a person. There are countless women who brave breast cancer everyday. The strength they hold is an inspiration to all. Initiatives like the Pinkathon urge everyone to become more aware about the reality which most people like to shy away from. But there is no shying away from the truth. So all the women out there…

HIGHLIGHTS OF THE RUN:

– Karisma Kapoor flagged off the first edition of Pinkathon International 10k women’s run
– 50 female cops from Mumbai police running
– 650 members from Brahma Kumaris NGO running
– Group of 9 tribal women who came Wajreshwari. They are farmers who even ran at Vasai – Virar marathon.
– School children running in school uniforms and school bags
– Tara Sharma completing 5k run
– Anusha Dandekar completing the 10k run in the 13th place
– Lisa Haydon completing the 10k run. Will run at the SCMM full marathon
– Minister of Women and Children Welfare – Varsha Gaikwad present throughout the event to cheer the participants and award the winners
– Organizers, Maximus Events donated a cheque of Rs. 2 lacs to Deveika Bhojwani from Women’s Cancer Initiative and Tata Memorial Hospital
– All 9 winners (3 from each category of 10k, 5k and 3k) were awarded in the form of Television sets, refrigerators, OTG Ovens and Neutrogena hampers along with gift vouchers and Pinkathon goodie bags.