In keeping with the films theme that revolves around a rock band group, Tricolor Creations & Eon Films with the director Sanghamitra Chaudhari launched its film’s sound track at Sheesha Sky Lounge with a musical event in the presence of the movie’s cast. 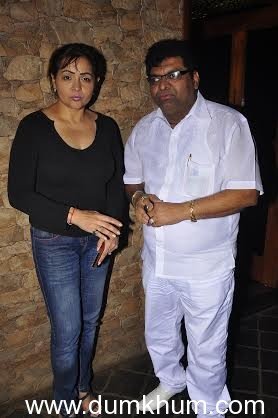 Sanghamitra said, “It’s really an honour for me as a first timer in Bollywood to be associated with a brand name like Venus. But I guess, our film’s music has come out well and is sure to catch on”.

“The atmosphere was magical. We were keen on the film’s other composer Saqi & Sidhu to joining at this event, but unfortunately they couldn’t make it,” said Mohan Das. One of the rocking band numbers is delievered by Saqi who incidentally is playing the negative lead in the film. A young talent who runs a band, Saqi’s band is “The Devil’s Boyz”  who is a loser. The song, “My choice all the boys” which is fast catching on is composed, enacted and sung by Saqi. The song is outrageously male dominated and adversely against straightism. The guy is bold, arrogant and obstinate bringing in a shocking climax to one of the characters lives.

Having directed more than 12 films in Bangla language, this is Sanghamitra’s bollywood debut. Shot entirely in Kolkata, “Strings of Passion” is a youth centric film revolving around three post graduate students Neel, Manu and Amit who are best friends in collge. This is a story of their relationships and also the effect of bad parenting on their lives. While Zeenat Aman plays an overprotective, over caring yet dominant mother to Avalok Nagpal, the other guys are Shubh Mukherjee and Trishaan. The event was well attended by cast and crew of the film. Other notable personalities from Bollywood who made to the event include Manjot Singh, Hrishitaa Bhatt, Shakti Kapoor, Sharbani Mukherjee, Salil Ankola, Parikshit Sahni, Sandeep Anand and others. Pallavi Chatterjee who is reknowed in Kolkata’s Tollygunge also flew down specially for the event.