In today’s age, malls are considered the one-stop shop for everything from food to shopping to watching movies to just spending a happy time with friends and loved people. However, in the coming future, going to a mall might also be defined as a terrifying experience, especially after MSM Motion Picture & Contiloe entertainment’s next directed by Pavan Kripalani’s ‘[email protected] Mall’ releases on February 21st,2014. Pavan is the man who sent chills up everyone’s spines with his directorial debut ‘Ragini MMS’ and now, the talented filmmaker is back with another horror flick, that will surely make you think twice about visiting a mall again. 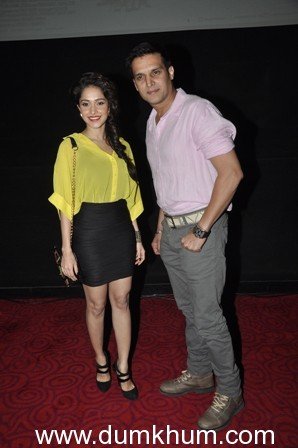 Jimmy Sheirgill, who plays a mall security head in the film, said, “This was one of the toughest films to shoot for me as the film was mostly shot at nights and it took a major toll on our health. Not only this, the location of the shot was actually eerie, which added to the bunch of challenges that we had to face while shooting for [email protected] Mall. However, I believe that all the hard work that has been put in has been honestly reflected in the film and we all are quite eager to know the public reaction to this film, which can be easily described as one of the best horror films made in Bollywood.” NP Singh, CEO, Multi Screen Media Pvt. Ltd, which is producing the film said, “With [email protected] Mall we continue with our endeavour to make content driven [email protected] Mall is a horror flick which apart from good content is also backed by popular talent like Jimmy Sheirgill&PavanKripalani. Shankar-Ehsaan-Loy have given the music while Ganesh Hedge has choreographed the dance number&RanjitBarot has given the background score for the film. We have produced a horror film that is on par with any mainstream Bollywood film.”

On his part, Director PavanKripalani says, “Ever since I was a kid, I have been a fan of the horror genre and as a director; it has always been my ambition to make classy horror films. After Ragini MMS, I felt that there is more to explore as far as horror films are concerned and ‘[email protected] The Mall’ is my honest attempt to make a horror flick in the vein of classic Hollywood scare fares like ‘The Exorcist’ and ‘The Shining’, which I have grown up watching. ”

Produced by MSM Motion Pictures and Contiloe Entertainment, ‘Darr @ The Mall’ is a first of its kind horror story set in a mall. Fear Opens on 21st February. ‘Darr @ The Mall’ will surely change your mall-going experience in a radical way!