Kamasutra 3D, has created a huge buzz in Bollywood. It managed to raise a few eyebrows with it`s posters and trailers. The film which stars the dashing Sherlyn Chopra, is a periodic drama, which is based on Vātsyāyana’s Kama Sutra.  It portrays the journey of a young Indian princess who sets out on a voyage to find her husband. Though, it has it`s own moments, the movie focuses more on war and not on sexual pleasure. The movie is conceived by the amazing trio, Dr. George John, the presenter and Executive Producer of the movie; Sohan Roy, the Co-Producer; and the Director, Rupesh Paul. 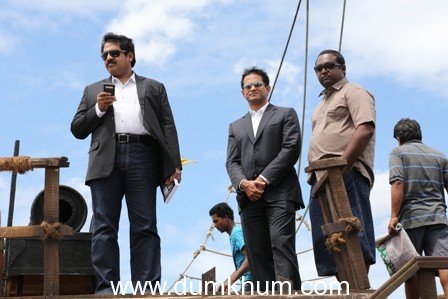 According to the sources, Dr. John is a well known face in Hollywood. He is a world famous surgeon and has treated many actors like Tom Cruise and many sport sensations like Wayne Rooney, David Beckham, Roger Federer and Serena Williams, to name a few. But, he was really bored of his insipid life, and wanted to do something more exciting. He wanted to get involved in something else and looked at films for a change. The swap was really astonishing but, it helped him. When he heard about Kamasutra 3D, he was highly intrigued. He knew, he had to be associated with it in some way. So, he produced the movie with his under his newly formed brand GJ Entertainments. He was always fascinated by the Indian Culture and thinks of India to be one of the important countries in the world. He considers India to be a rich nation in terms of it`s customs, traditions and beliefs. Coming to the captain of the flick, the Director of Kamasutra 3D, Rupesh Paul accords a tribute to the 100 years of Indian Cinema, with this movie. With the unprecedented use of technique in the portrayal of erotica, the director promises a new dimension to the movie and its storyline. Set in the backdrop of the ancient, Kamasutra 3D is the journey of a soulful love embodied with betrayal and war. It weaves the transformative changes in body, mind and soul by the forbidden world of sexual love and sensuality.It is also the debut production of his newly formed production house –Rupesh Paul Productions Ltd. (RPPL).

Kamasutra 3D, will promise to blow your mind with it`s genuine screenplay and authentic look.