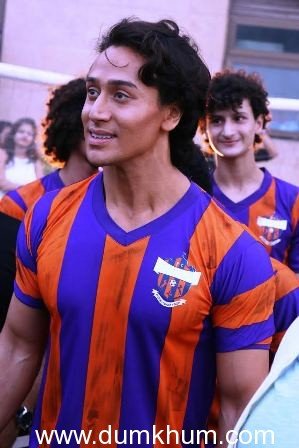 We all know what a big fan is Tiger Shroff of Hrithik Roshan and how he idolizes him. At a recent award function the audience was left awestruck as they saw Tiger Shroff dancing to his track with Hrithik Roshan. As the entire industry as well as the audience knows about this fan moments of Tiger Shroff, the crew of his next single with Kriti Sanon experienced it on the sets. For the next single which is produced by Bhushan Kumar, Chal Wahan Jaate Hain, Tiger Shroff represents his college football team. When he and his stylist were deciding on the looks for this song, Tiger instantly had his choice of jersey for the football scenes. No hint to guess this, he chose to wear a jersey which was quite similar to his idol’s football team – Pune FC. Confirming this Tiger says, “In the song, there is a match which my team wins. We were supposed to wear jerseys in it. My costume designer got three-four options and I picked out this particular jersey. I’m a big fan of Hrithik sir and I’m told this jersey is similar to the one his team wears.“ Though that scene was the last one for that day, the crew extended the end time that day as everyone on the set ended up playing some more football post pack up. Tiger and Kriti with the entire crew in rains ended up playing football which was a definite time out after a 14 hrs shoot.