The makers of the much awaited movie ‘Heropanti’ have released two new exclusive posters. The posters feature protagonists Tiger Shroff and Kriti Sanon as an exquisite couple in one and in a fearful look in the other.

The first poster reveals about the beautiful chemistry between Tiger shroff and Kriti Sanon. They look aesthetically attractive posing against the blue backdrop. Through this poster, fans will also get a glimpse of Shroff’s toned physical appeal and Sanon’s aura. 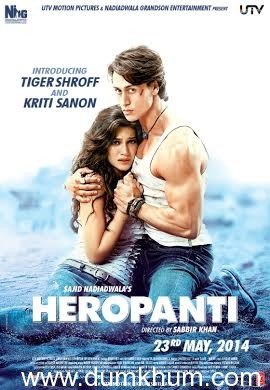 The second poster unveils their feared look as the pose characteristically. It portrays the hardships the couple goes through. Audiences will surely get a hint about the various facets of the lead characters.