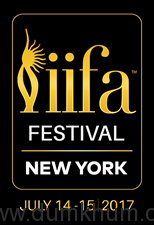 The tickets will be available exclusively on ticketmaster.com and www.iifa.com

Indian cinema’s grandest celebration, the 18th Edition of IIFA is all set to delight fans with its premiere edition in New York. The highly anticipated IIFA Festival New York 2017 promises to be a mélange of glitz, glamour and star power with stunning performances from Bollywood megastars such as Salman Khan, Alia Bhatt, Katrina Kaif, Shahid Kapoor, Sushant Singh Rajput, Kriti Sanon, A. R. Rahman among others.

With the excitement growing across the world, people can now get that hot seat for the spectacular IIFA Awards New York 2017 at MetLife Stadium as tickets go LIVE to the general public beginning Wednesday, from April 19th, 2017, 9.00 am EST. exclusively available online at ticketmaster.com or by calling (800) 745-3000 or by simply clicking the‘Tickets Tab’ on the official IIFA website http://www.iifa.com/. A special treat for the fans, they can also purchase the tickets at MetLife Stadium Box Office beginning Thursday, April 20 at 11:00AM ET (Box Office hours:  M – F, 11am – 5pm).

Following the tremendous success of IIFA Festival over the years, the enthusiasm and excitement is huge as IIFA travels to the United States for the second time. The iconic MetLife Stadium, synonymous for hosting the illustrious NFL games, major concerts and entertainment events among others, will play host to the highly anticipated IIFA Festival New York 2017 on the 14th & 15th July 2017.

With the tremendous growth and recognition that IIFA has amassed over the years we are now creating one of the biggest and grandest IIFA Awards shows to date with several new dimensions and developments to the concept of the show.  IIFA is growing towards building a stronger global outreach. With a star studded contingent travelling, this year, IIFA gears up to take over New York City- a city that is renowned to be a mecca for entertainment, business, fashion and culture with an unforgettable 2 day IIFA Festival New York 2017 featuring, IIFA Weekend Press Conference and IIFA Rocks Green Carpet, IIFA Rocks, followed the next day by the much awaited IIFA Awards Green Carpet & IIFA Awards.

As IIFA continues to bring together the biggest stars of Bollywood and Hollywood on one stage, the IIFA Festival New York 2017 will play host to some of the most celebrated stars of the Indian film industry, notable guests, and dignitaries from India and the region, world media and Indian cinema fans from across the globe.  A treat for music lovers, IIFA Festival New York 2017 will also be celebrating 25 years of A. R. Rahman in the industry.

Commenting on the occasion, Salman Khan says, “It always feels great to be a part of the IIFA Movement and I look forward to the IIFA Festival in New York.”

Speaking about her debut at IIFA, Alia Bhatt shares, “I am very excited to be a part of IIFA 2017, as this is going to be my debut at the IIFA Festival after 5 years in the industry. I am super excited that IIFA is being held in the beautiful city of New York. IIFA is all about togetherness and the celebration of the Indian cinema globally and I eagerly look forward to this celebration”.

Katrina Kaif says, “I’m really excited and looking forward to performing at the IIFA Awards this year. It is such a great platform that not only showcases the celebration of cinema globally, but also it’s a great opportunity for us to reach out to our fans worldwide. I am excited that this year, it is happening in one of my favorite cities – New York!

Expressing his excitement, Shahid Kapoor says, “IIFA is all about creating memories and experiences. I had a great time last year hosting the show. This time around I will be performing at the IIFA Festival New York. I am hoping to give the audiences a power packed performance in the City That Never Sleeps.”-

Sharing his experience with IIFA, Sushant Singh Rajput says, “I have always been excited for IIFA since my college days, because that’s when my association with IIFA began. From being a back-ground dancer to performing for the audiences as an actor, IIFA has always been very memorable to me. I am very grateful to IIFA for giving me a chance to perform. I doubt I will be performing on my songs, because the films I have done, don’t really have peppy numbers. However I look forward to my performance at the IIFA Festival New York 2017.”

Commenting on her excitement for IIFA, Kriti Sanon says, “IIFA is a great platform where everyone from the industry travels globally and celebrates the glory of Indian Cinema. The IIFA Awards has always been held in the most beautiful destinations and this time it’s being held in New York. I am enthusiastically looking forward to my very first performance at the IIFA Festival and my first visit to the City.”

Wizcraft International Entertainment Pvt Ltd, known for pioneering many extravagant and mesmerizing events in India and across the world, conceptualized IIFA 17 years ago, by the creative genius of the trio of masterminds – Andre Timmins, Viraf Sarkari and Sabbas Joseph. The vision was to celebrate Indian cinema outside India; and IIFA (International Indian Film Academy) the flagship brand is the accomplishment of that dream. IIFA is dedicated to building bridges across cinema, businesses, communities and nations, creating everyone’s dream: “One People. One World”. The journey over these past 17 years has seen the brand evolve from a one night affair to a weekend, which celebrates and hosts various events and activities related to cinema, business, culture, music and fashion. Hosting a variety of events during the weekend IIFA helps bring together a global community of people from all walks of life.

Andre Timmins, Director- Wizcraft International, the producers and creator of the IIFA movement says, “We are so pleased to announce this spectacular line up of stars and performers for the 2017 IIFA Festival New York.  The anticipation around this year’s event has been huge and we are proud to be bringing superstars like Salman Khan back to the USA for his fans.  This is going to be one of our biggest and greatest shows ever being hosted at MetLife Stadium. This announcement of performers is just the beginning and we have much more to come to share with our fans and audiences around the world.  We are thankful to the industry for always supporting IIFA and joining us on this wonderful journey across the globe to help build and strengthen the power of Indian Cinema.”

IIFA continues on its journey with strength to grow every year in the world of entertainment and building the outreach as a major event globally to bring positive results and impact. This year is set to be one of the biggest, most extravagant and amazing IIFA Weekend’s and Awards to date. Keep up to date with all the latest news and details on IIFA by logging on to www.iifa.com or checking out the social media handles:

IIFA Festival is ready to take over New York City. Don’t miss it for the world!